The Houston Dynamo dug itself a huge hole when it lost to the defending MLS champion Seattle Sounders, 2-0, in the first leg of the Western Conference finals before a record crowd of 22,661 at BBVA Compass Stadium.

The Sounders had never won in eight previous games at BBVA, but they cruised thanks to first-half goals from Gustav Svensson and Will Bruin. 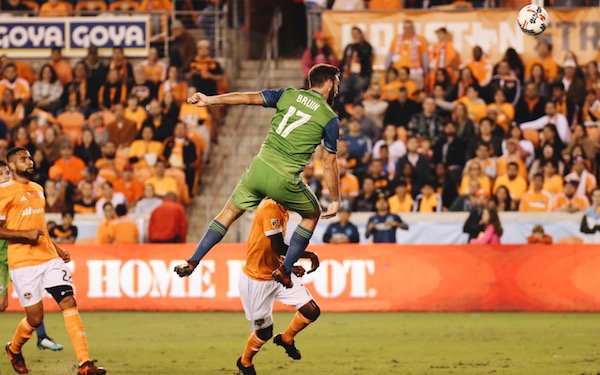 Svensson, back from international duty where he helped Sweden beat Italy to clinch a berth in the 2018 World Cup finals, opened the scoring in the 11th minute when he eluded his marker, Eric Alexander, and scored on a header off Nicolas Lodeiro's corner kick.

While Dynamo pressed to get back in the game, all it did was create more opportunities for the Sounders on the counterattack. In the 27th minute, the lively Joevin Jones was played through from the left wing and taken down by Jalil Anibaba for a penalty.

The good news for the Dynamo was keeper Joe Willis dove to his left and tipped away Lodeiro's penalty kick. The bad news: Anibaba was issued a red card (DOGSO) on Video Review, leaving Houston with 10 players.

The Sounders had several chances to add a second goal against the panicky Dynamo defense before Bruin scored it four minutes before halftime on a header off Jones' cross.

2. Result could have been a lot worse for Houston.

The Dynamo showed life early in the second half, but youngsters Mauro Manotas and Tomas Martinez both missed chances in front of Tyler Miller's goal.

Seattle had the best chances, though, and should have scored at least a third goal. In the 78th minute, just before he exited the game, Jones broke in from the left side with only Willis to beat but shot wide.

In stoppage time, sub Victor Rodriguez lined up a shot from the left side but hit the crossbar. Two Seattle players had chances to convert the rebound but whiffed with the goal at their mercy.

3. Seattle shows off its depth.

A lot has been made this season about the depth of runaway Supporters' Shield winner Toronto FC, which it again showed off in holding Crew SC to a 0-0 tie in Columbus without suspended Jozy Altidore and Sebastian Giovinco.

But the Sounders have remained on top thanks to an influx of new players in the offseason (Svensson, Bruin and Nouhou Tolo) and during the season (right back Kelvin Leerdam, Lamar Neagle and Rodriguez).

Goalkeeper Stefan Frei was a late scratch with a hamstring injury, but Miller recorded the Sounders' third shutout in three games and fifth straight overall. Svensson, who has played multiple positions this season, started in central midfield with Cristian Roldan in place of injured captain Osvaldo Alonso. The two-goal advantage allowed Coach Brian Schmetzer to rest star Clint Dempsey for the second half. In his place, Rodriguez created all kinds of problems on the wing.

The Sounders' depth will be tested in the second leg. Roman Torres picked up his second yellow card of the playoffs and will sit out next Thursday's second leg in Seattle. On the other hand, Houston will not only be missing Anibaba but also Honduran speedster Alberth Elis, also out for yellow-card accumulation.