Preview: Houston is in a two-goal hole for MLS Western Conference second leg

It’s a case of double jeopardy for the Houston Dynamo, which is trailing by two away goals and will be missing two starters when it plays Seattle Thursday (ESPN, ESPN Deportes, 10:30 p.m. ET) at CenturyLink Field in the Western Conference finals.

Head coach Wilmer Cabrera must make do without defender Jalil Anibaba (red card) and attacker Alberth Elis (yellow-card accumulation) for the rematch of Seattle’s 2-0 victory nine days ago in the first leg. Ex-Dynamo Will Bruin scored the second goal just before halftime to seal the victory after an early strike from Gustav Svensson and a Nicolas Lodeiro penalty kick was saved by Houston goalie Joe Willis. 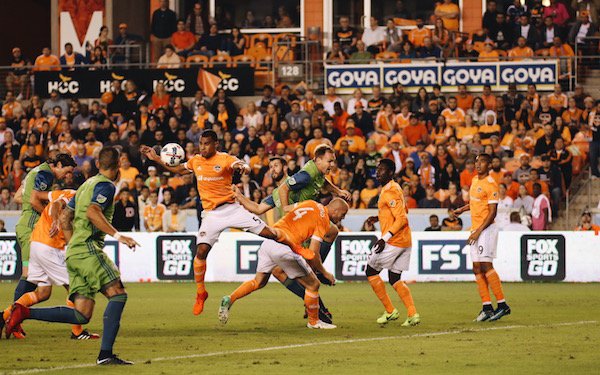 The second half played by Seattle 11-against-10 felt of a formality and the same mood will likely prevail on Thursday, unless Houston can punch through the Sounders’ defense to score the first goal; it did so 15 times during the regular season and was the only team in the league to go unbeaten (11-0-4) when it took a 1-0 lead.

“All the players that are here are ready to play,” said midfielder Tomas Martinez. “This is a very competitive group and anyone who gets to play will be up to the task. I think if we score up there at the beginning of the game we will have many opportunities and, well, we will do everything possible to win.”

On the down side, Houston’s miserable road record (1-9-7), its suspended players, and two-goal deficit shrinks its chances of success. Its has firepower aplenty even without Elis; Martinez is a member of an attacking force that includes Erick "Cubo" Torres, Mauro Manotas, Romell Quioto, and Vicente Sanchez. The absence of Seattle centerback Roman Torres, who is also suspended, adds more hope of scoring the goals Houston needs to advance.

“We’re going to make changes always thinking about the balance of the team. We cannot unbalance the team,” said Cabrera. “Also, we’re going to try and present a team that’s going to be able to not only play well, but defend when we have to defend, keep the ball and administrate the ball when we have the ball. And then try to attack and create difficulties and score goals when we have those possibilities.”

The Dynamo back line has been in flux for much of the season and Willis is an emergency replacement for starter Tyler Deric, suspended indefinitely by the league in the wake of an arrest for assault in a domestic dispute. He was suspended after the first leg of the conference semifinals against Portland, a 0-0 tie. With Willis in the nets, Houston stunned the Timbers, 2-1, at Providence Park.

The defending league champion finished tied with Portland for most points in the Western Conference (53) and blanked Vancouver twice (0-0 and 2-0) in the conference semis. It hasn’t conceded a goal in nearly two months, since a 2-0 loss at Philadelphia Oct. 1. It blanked FC Dallas (4-0) and Colorado (3-0) in its last two regular season games and is riding a five-shutout streak counting the three playoff games.

An impressive -- and recent -- road result in Portland is another reason the Dynamo players can believe in themselves, even if all of them won’t be available. Houston can’t count on the absence of Torres or any other Sounder to aid its effort.

“They’re a strong team,” said Willis. “They have a lot of good players and they have a lot of depth. I think whoever steps into that position will, I’m sure, do the job for them — hopefully not. But we’re not really trying to think about who’s playing and who’s not. It’s us vs. them. We're not trying to focus on individuals.”