Most head coaches can look great with great players, and the men in charge of MLS Cup finalists Seattle and Toronto FC can certainly point to their rosters as major reasons for their success.

A championship game between two evenly-matched teams usually is decided by moments of brilliance and/or catastrophe, yet those critical points can be products of tactics as much as technique. On Saturday, much postgame discussion will focus on how well Brian Schmetzer and Greg Vanney, respectively, aligned their players and plotted their strategy.

Led by Clint Dempsey (12 goals), Will Bruin (11) and Nicolas Lodeiro (12 assists), the Sounders scored a rather modest 52 goals and relied more on their defense (39 goals conceded, 13 shutouts). Toronto FC, paced by its own tridente -- Jozy Altidore, Sebastian Giovinco, Victor Vazquez  -- that racked up a combined 39 goals and 28 assists, scored a league-best 74 goals, and were slightly stingier than Seattle (37 goals allowed).

This is one rematch for which no one outside the Seattle organization wants a repeat of the dreary 0-0 2016 MLS Cup Final won by the Sounders, 5-4, on penalty kicks after they labored through 120 minutes without a shot on goal. Most of the indicators point to a much better contest though not necessarily a high-scoring one. Only Sporting Kansas City (29) allowed fewer goals during the regular season than these two teams, and no ball has crossed the Sounders’ goal line in more than two months.

“Obviously, we have history there, so it’s exciting,” TFC wingback Justin Morrow told reporters. “Our goal from the beginning of the season was to get back here and give ourselves a chance to win. It’s against an opponent that we saw last year, but they’re a quite different team this year. It’ll be an exciting matchup.” 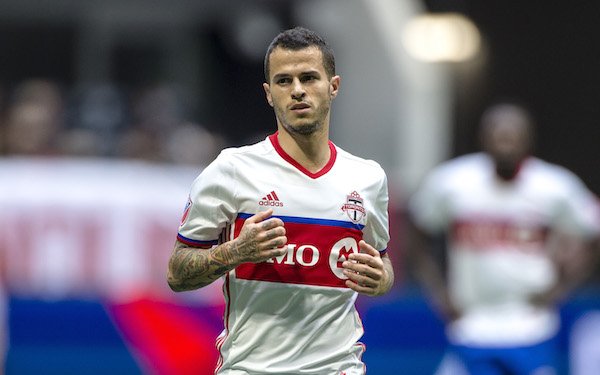 Dempsey and Bruin are two of five Seattle regulars not present for last year’s MLS Cup. Vazquez is the major offseason addition for TFC, and his influence greatly complicates the life of Schmetzer, whose crucial decisions will be tied to roles as well as personnel.

How do the Sounders counteract the dual threat of Giovinco and Vazquez, two players adept at probing every nook and cranny of the defensive third in search of space? Giovinco will launch his darting runs and dribbles from just about any angle, and if Vazquez can’t find room in the middle he will drift as wide as the situation demands.

Of course, as TFC showed while cutting up Crew SC’s central defense to set up the only goal of the second leg for Altidore, it doesn’t need to rely on service from wide areas. (Morrow enjoyed an amazing season offensively by scoring eight goals, including a hat trick, from the left flank. Right-sided counterpart Steven Beitashour seldom goes for goal but can serve a good ball.) Though TFC has bagged only three goals in four postseason matches, its firepower is of a force not often seen this season by the Sounders, who struggled to contain the more potent Eastern teams.

The top nine Eastern Conference teams each scored at least 50 goals; only the top four Western teams reached that figure. The breakdown of home and away games of an unbalanced schedule can skew goalscoring figures somewhat, yet the difference in Seattle’s defensive record against the respective conferences is glaring.

The Sounders were Scrooge-like in their own conference and generous on the other side. Seattle allowed 22 goals in 11 games (2.0 average) against the East and ironically its only shutout was a 0-0 tie at home with high-scoring Atlanta. It lost to Toronto, 1-0, on an Altidore goal at CenturyLink Field May 6. Within the Western Conference, Seattle conceded 17 goals in 23 games (0.74) during the regular season and in four playoff games has outscored Vancouver and Houston, 7-0.

The majority of its 13 shutouts were posted in the latter portion of the season and it has carried that resilience right through the playoffs. Seattle has not conceded a goal since a game against Philadelphia on Oct. 1, and a quadrilateral of centerbacks Roman Torres and Chad Marshall connected to midfielders Cristian Roldan and Gustav Svensson forms a barrier very difficult to penetrate.

Roldan also scored six goals and notched three assists; he can torment defenses coming from deeper positions behind the primary attacking trio. Svensson slotted into central defense alongside Marshall with Torres suspended for the second leg against Houston and Torres’ return means Schmetzer must omit someone with Svensson back in midfield.

Captain Osvaldo Alonso failed a fitness test Thursday morning and will sit out the final. He’s played only 16 minutes since sufferering a hamstring strain in late September: a short stint in the conference semifinals against Vancouver. Schmetzer does have Victor Rodriguez, who since signing with the team in August has scored twice in seven regular-season appearances and notched his first playoff goal against Houston.

If the attack needs a spark and/or some pace, Jordan Morris is a great option, as is Rodriguez if he doesn’t start. Defender Tony Alfaro and midfielder Harry Shippare also in the mix.

“We need to be calm on the ball, we can’t lose easy passes,” said Lodeiro to reporters via a translator Thursday. “We just need to try to dominate the midfield and stay focused for the full 90 minutes and from there things take care of themselves. Most of all we need to keep the midfield closed, so they don’t have access to those passes.” 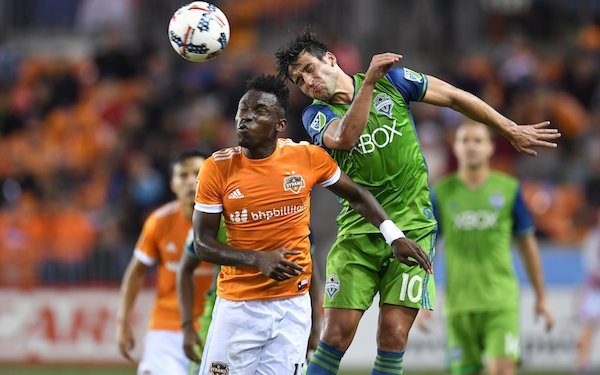 Vanney’s main injury concern is Altidore’s ankle, crunched shortly before he clipped home a wonderful goal against Crew SC. Yet TFC, too, is blessed with a potent bench. Tosaint Ricketts scored two of his seven goals as a sub, and no game-weary foe will relish the sight of speedy Raheem Edwards (6 assists). Midfielders Marky Delgado and Jonathan Osorio came off the bench in the second leg of the Columbus series and Nicolas Hasler has done well on the right flank.

In the Eastern Conference finals, TFC had to tweak its 3-5-2 formation when fronted by Crew SC in a 3-4-1-2 alignment. Right back Kelvin Leerdam can present TFC with an altered look when he pushes forward, and the range of Dempsey forces constant readjustments by midfielders and defenders. Vanney's change of formation midway through the 2016 season fueled its charge to the title game and this year's juggernaut campaign, but Crew SC's display revealed a few exploitable flaws.

“Certainly that matchup between Beitashour and Morrow and whoever we play on the left and right, it’ll be an interesting matchup to see who gets the best out on those flank areas," said Schmetzer.

This game is a huge challenge for the TFC back line, especially central linchpin Drew Moor, who won the 2010 MLS Cup with Colorado and backstopped Toronto to the final last year. Moor is adept at stepping up into midfield to win balls and intercept passes but he must do so selectively with attackers buzzing into Bruin’s wake.

Bruin, who scored 50 goals the past six seasons for Houston, is playing the best soccer of his life and is the perfect focal point for the craft and guile of Dempsey and Lodeiro. By getting on the end of crosses, working combinations through the middle, or checking back as a hold-up option, He presents myriad problems for Moor and back-line partners Chris Mavinga and Eriq Zavaleta, a former Sounder draft pick who has started 41 of 46 games since winning a starting job midway through the 2016 season.

If Bruin can find room in the TFC back line or between it and deep central midfield – from where Michael Bradley often dictates play – he will create angles and carve open spaces for Dempsey, Lodeiro and winger Joevin Jones. While tracking the attacking three, Bradley must also be wary of Jones, should he choose to drive inside rather than float wide.

“For us, it's less about the individuals and more about taking away the key spaces on the field,” Vanney said. “They’ll have different guys show up in different areas and if we try to track individuals into areas we’re going to get pulled apart. So it’s more about our guys, and recognizing who's supposed to be occupying what space regardless of what guy shows up.”

One free kick by Giovinco could turn all of the tactical talk into mush; his propensity to draw fouls and swerve home the subsequent free kicks have stung many an opponent. However, his prickly temperament can distract him from the job at hand, which is another reason Vazquez’s presence has been so significant.

The rematch of a terrible title game could be memorable, this time for the right reasons. “It’s a wonderful moment, it’s an exciting moment, it’s a lot different than last year,” said Lodeiro.
Let's hope so.