U.S. Soccer presidential race: Hope Solo: 'The time for talking is over'

The race for U.S. Soccer president took yet another twist as Hope Solo -- suspended by the federation in 2015 and 2016 at the tail end of her playing career -- announced she is running.

Solo made the announcement in a Facebook poston Thursday night. 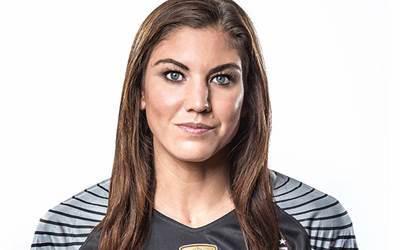 “The time for talking is over,” wrote Solo, who has been traveling internationally and discussing leadership issues. "Through all of these experiences," she added, "I have learned that it is the responsibility of those in leadership positions who have the ability to change policy to stop giving lip service to the issues, but to instead, execute and take the actions required to affect real change."

-- Invest in robust developmental programs, starting with youth soccer's diversity.
-- Push for equal pay for the U.S. women's national team and all women in the federation workplace and inclusion of women at all levels of the federation.
-- Make soccer financially accessible to all.
-- Restructure the roles and functions of the federation's executive officers and executive branch.

A spokesperson for Solo told SI.com's Grant Wahl she has the three letters of support from member organizations needed to run. The deadline to obtain them is Tuesday.

Solo, 35, helped the USA win Olympic gold medals in 2008 and 2012 and the 2015 Women's World Cup. She recorded 103 shutouts in 202 international matches, making her the greatest women's goalkeeper of all time.

But off-the-field issues often got her in trouble with U.S. Soccer.

-- She was suspended for the third-place game against Norway at the 2007 Women's World Cup after blasting head coach Greg Ryan for dropping her in favor of Briana Scurry, the hero of the 1999 Women's World Cup triumph, for the semifinals. The USA lost to Brazil, 4-0.

-- She was arrested in June 2014 on two charges of fourth-degree domestic violence assault for allegedly striking her half-sister, Teresa L. Obert, and Obert's son in an early-morning altercation. The case was first dismissed and later reinstated as appeals continued over procedural issues related to the lack of cooperation of Obert and Obert's son.

-- U.S. Soccer suspended Solo for 30 days in early 2015 following the DUI arrest of her husband Jerramy Stevens. Stevens and Solo had taken a team van at training camp in California -- players often used the vans for outings and to run errands -- and Solo was with Stevens when he was pulled over.

-- The last straw was when she said the USA "played a bunch of cowards," after it was ousted by Sweden in a shootout from the Rio Olympics. U.S. coach Jill Ellis and U.S. Soccer secretary general Dan Flynn flew to Seattle to inform Solo of U.S. Soccer's decision to suspend her and terminate her national team contract.

Solo has been active on labor issues and part of the group of players who filed a wage discrimination suit against U.S. Soccer with the EEOC.