After more than a nervy hour of controlling the action without getting a goal, Toronto FC punched through with a Jozy Altidore strike to propel it past Seattle, 2-0, in the 2017 MLS Cup Final Saturday at BMO Field.

A resolute team performance anchored by defender Drew Moor and midfielder Michael Bradley enabled TFC’s front three of Altidore, Sebastian Giovinco and Victor Vazquez to overpower the Western Conference champion for most of the 90 minutes.

TFC outshot the Sounders, 22-7, yet a magnificent game by Seattle keeper Stefan Frei locked out Seattle until Altidore scored midway through the second half. A few Sounders flurries down the stretch kept the result in doubt until Vazquez capped off a stellar display with the second goal in stoppage time.

MLS Cup 2017 Player Ratings:
TORONTO FC
Starters
5 Alex Bono (USA, 23)
No major saves, cleaned up a cross and a double ricochet minutes before clinching goal.
6 Steven Beitashour (Iran, 30)
Kept his side secure, seldom gave Joevin Jones or Seattle attackers an inch of space.
7 Drew Moor (USA, 33)
A tower in the back. Headed clearance to Bradley kicked off sequence for winning goal.
7 Chris Mavinga (France, 26)
Irresistable force on the ground and in air, including in the attack.
6 Justin Morrow (USA, 30)
A threat on the left side, whipped in crosses, shut down his flank for most of the match.
8 Michael Bradley (USA, 30)
Imperious in the middle. Five tackles, four interceptions, six clearances, 12 recoveries. First-time hit short-hopped Frei in the chest. 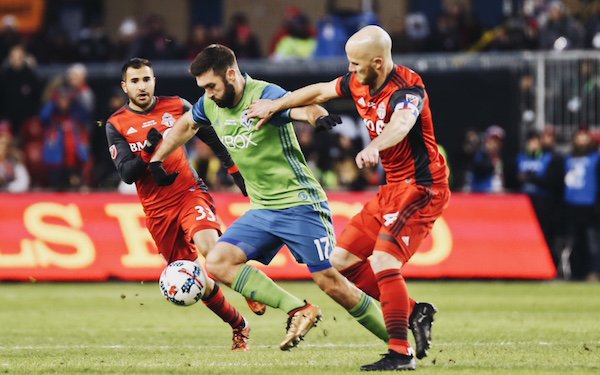 6 Jonathan Osorio (Canada, 25)
Shuttled the ball back to front, plugged up the middle, fired in a good shot.
6 Marky Delgado (USA, 22)
A solid game in the trenches with four tackles and seven recoveries and a ton of hard work.
8 Victor Vazquez (Spain, 30)
Iced victory by tapping in a final-seconds rebound, which was just reward for a match of four key passes – including a threaded diagonal ball that covered almost 40 yards -- and the ball that Giovinco relayed to Altidore for his goal.
7 Sebastian Giovinco (Italy, 30)
Assisted on the game-winning goal, set up another good opportunity, forced four saves on seven shots, didn’t do well with his free kicks.
7 Jozy Altidore (USA, 28)
Just as he did in the second leg of the conference finals he chased a ball played into space and coolly steered it into the net. Also set up teammates three times for good chances.

Subs
5 Armando Cooper (Panama, 30)
Rang a shot off the post that Vazquez knocked in.
NR Nick Hagglund (USA, 25)
Added muscle in the back.
NR Benoit Cheyrou (France, 36)
Got on the field for stoppage time.

SEATTLE
Starters
8 Stefan Frei (Switzerland, 31)
Required too many times to pull off tough saves and by far the Sounders’ best player.
4 Kelvin Leerdam (Netherlands, 27)
Looked dangerous a few times going forward but crosses produced almost nothing. Cut inside to fire one shot way over the bar.
5 Roman Torres (Panama, 31)
Failed to close down Altidore on the winning goal, won a lot of tackles and aerial duels.
5 Chad Marshall (USA, 33)
Quelled a few threats with vital clearances, and repelled numerous crosses. Couldn’t get a piece of Cooper rebound off the post. Caught sleeping on ball as Giovinco slipped in behind him.
4 Joevin Jones (Trinidad & Tobago, 26)
Did a fair job defensively and set up one scoring chance but passed very poorly.
5 Cristian Roldan (USA, 22)
Saved goals with two vital interventions a few minutes apart. Served up too many interceptions.
4 Gustav Svensson (Sweden, 38)
Rolled fours in clearances, recoveries, and interceptions, but didn’t win a tackle and there were times when he needed to.
2 Victor Rodriguez (Spain, 28)
Completed most of his passes in the middle third, contributed little at key moments.
3 Nicolas Lodeiro (Uruguay, 28)
Dismal on the ball, lost it on the dribble three times. Played two key passes but otherwise didn’t much influence the game.
3 Clint Dempsey (USA, 34)
Managed to take four shots, only attempt on goal was easily saved.
2 Will Bruin (USA, 28)
Seldom emerged from the black hole created by Moor and Mavinga.

TRIVIA. Toronto FC is the first team to win a MLS Cup rematch after losing the previous season. Houston swept New England in the 2006 and 2007 finals, and lost to the Galaxy in 2011 and 2012.