After a dozen pro seasons with MLS clubs and several years overseas, midfielder Arturo Alvarez is back where he started out. 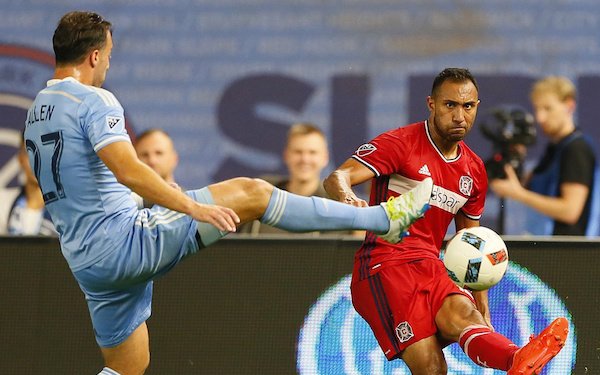 The Houston native has been acquired by the Dynamo in a trade with Chicago, which received a second-round 2019 SuperDraft pick. Alvarez has played in 243 career games with 148 starts (including playoffs), scoring 32 goals and registering 31 assists.

“We are pleased to add Arturo Alvarez to our roster as we prepare for the 2018 season,” said Dynamo general manager Matt Jordan in a team statement. “His quality on the field along with his professional approach to the game will make him a good addition to our group.”

During the 2017 season Alvarez, 32, played 26 games (13 starts) for the Fire. He scored three goals and registered two assists during the regular season and came on as a sub in its Knockout-Round loss to the Red Bulls. Last season, his first with the Fire, he tied a career best with five goals and set a career mark of nine assists. He came back to MLS after playing in Portugal and Hungary. He split time between San Jose and FC Dallas from 2003 to 2010, then played one season with Real Salt Lake before heading overseas.

Alvarez has parlayed his MLS exploits into national-team duty. Bypassed by the U.S., he chose to represent El Salvador – the home nation of both parents – and in 44 games he’s scored four goals. He played in the 2011 and 2015 Gold Cups as well as several World Cup qualifying campaigns. In October, El Salvador recalled him from a two-year absence for a friendly against Canada in Houston. Alvarez captained the team and played a role in the buildup by which El Salvador scored to win the match, 1-0.
chicago fire, fc dallas, houston dynamo, mls
Next story loading