In common parlance, a striker is out there to do that one thing: go for goal at every opportunity. Some are also adept passers and if a player can set up goals as well as score them, the classification is often (second) forward, winger, or attacking midfielder. The scorer devoted to that task is not hard to spot.

Those other positions, arbitrarily defined in some cases, will be included in future editions. This listing is the first of our annual rankings by positions of MLS players in 2017.

To kick off its expansion season, Atlanta United used one of its DP slot on a loan player, and right away the rest of MLS knew why. Josef Martinez, 24, scored five goals in games two and three -- somehow he’d been shut out in the historic opener against the Red Bulls -- and AUFC quickly converted his loan into a transfer. It was money well spent.

He injured his thigh on international duty with Venezuela and sat out three months; a foot contusion later in the season and other ailments limited him to just 20 games (17 starts). But nothing else could stop him: he scored 19 goals (only two via penalty kicks) in 1528 minutes of play, which works out to a goal every 83 minutes of play or 1.12 goals every 90 minutes. Nobody who scored at least 10 goals topped his scoring percentage of 28.4. 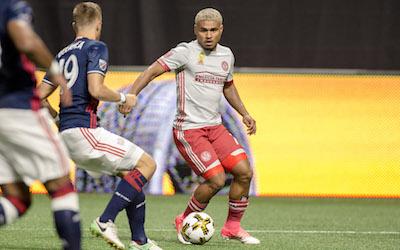 Father Time may be undefeated but old pro David Villa is still in the ring swinging away and landing punches. His took the fewest shots of his three MLS seasons, 136, yet still led the league in that category and finished second with 22 goals. He also notched nine assists and despite his age, 36, covers more ground and finds more spaces and shooting angles than players of any vintage.

Halfway through Nemanja Nikolic’s first MLS season, a torrid start of 16 goals in 18 games sparked talk of him breaking the league record of 27, but a nine-game barren run took him out of that conversation. He heated back up down the stretch to score eight goals in his last seven games to wind up on top with 24. He also connected at an excellent rate of 20.3 percent.

A poor season for Philly increased the stature and performance of C.J. Sapong, who nearly doubled his previous career-best of nine goals by smashing home 16. His scoring percentage? A top-shelf 23.9. In his second MLS season Ola Kamara upped his take by two goals to 18 during the regular season but notched only one in 466 playoff minutes.

A down year for the Red Bulls dragged Bradley Wright-Phillips, who matched his 2015 output of 17 goals but fell seven short of his 2016 production. He did convert 20.5 percent of his shots. Jozy Altidore also bettered the 20 percent rule (actually 22.1 percent) while setting a career high of 15 goals despite failing to convert two of five penalty kicks.

The targetman Seattle had been missing arrived in the form of Will Bruin. His 11 goals (20.3 percent) and robust play up top helped the Sounders place second during the regular season. His form held up in the playoffs (two goals, two assists) until a rough outing in the MLS Cup Final.

At times, Erick ‘Cubo’ Torres looked tremendous. In many games, he disappeared. All strikers go through hot and cold spells, but despite his 14 goals, there persists an unease about his play. Cyle Larin struggled on the field and missed games after a DUI arrest; he played more minutes (2,169) than he did in his 2015 rookie season (1,906), but scored only 12 goals as compared to 17.