Let your kids play soccer in the house -- with small balls

When I went to China to coach 6-year-old kids in a pilot program at five elementary schools in Beijing, I wanted to see what they were doing before I started with my contribution.

All the kids had a big ball. Wrong! Have you ever seen what kids do when they are trying to control a big ball? They spend half their time bending over and stopping the ball with their hands. The kids had to take the ball along a path and then bring it back. Half the kids would give up using their feet and carry the ball back to the starting line in their hands.

So, I got rid of the big balls and gave them much smaller balls. What happened next? None of the kids picked their balls up.

Why? Because the balls were small like them. They could relate to the small balls. And when they were doing things right, they found they could control the ball instead of losing control. Then they had the confidence to master it. In short, they were not intimidated by the smaller ball. It totally transformed the way these kids approached the soccer ball and the exercises they were doing.

When your kids are young, you can put these small balls around the house like I did. Yes, I had to convince my wife it was a good idea but she was happy to go along with it. The balls weren’t big and they weren’t likely to do much damage to the house. And learning the basic skills doesn’t require a lot of space. The kids are not trying to score goals or bounce the ball off a wall. They are trying to control the ball in a small space.

How far does Lionel Messi let the ball get away from him? It’s right there at his feet all the time. As it was when he was a kid. At his feet. I don’t know if his mom yelled at him. I suspect not. 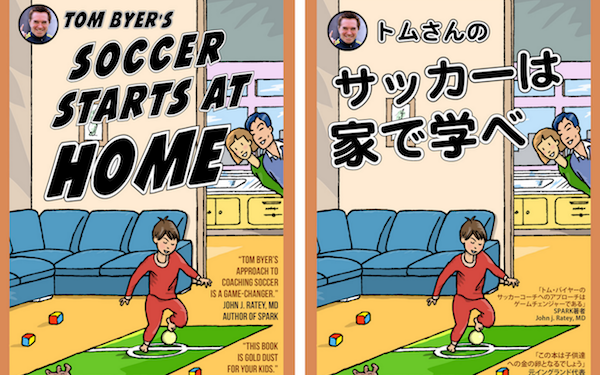 My wife accepts the value of my sons practicing in the house and doesn’t yell at them. I’m not just trying to convince the dads that a good soccer education is important, I’m also trying to convince the moms. If you allow your kids this little bit of freedom, the results can be remarkable.Parents can make such a big difference.

Michael A. Taylor, Chair of the United States Elite Coaches Association, put it this way:

"Research strongly suggests that parents play the largest role in influencing the development and healthy socialization of their children involved in sports. ... What is the difference between the children who reach the stage where their talent blooms forth and those who don’t? These children experienced something from their parents that seemed to make a huge difference.

"The research is very clear – what a parent says and does have a tremendous influence on their child. The more you as a parent support your children, the more your children will reach the highest level of talent development possible for them."

Coaches are relevant at some stage, but the driving force behind all the above athletes and many, many more were parents.

(Excerpted from the book "Tom Byer's Soccer Starts at Home" by Tom Byer & Fred Varcoe. Byer, who has spent more than 20 years of running youth soccer programs in Japan, was appointed the Head Technical Advisor by the Chinese Football Association in 2012, is launching a U.S. Soccer-supported “Soccer Starts at Home” program in Seattle, and was recently featured in an episode of HBO's “Real Sports with Bryant Gumbel.” Read Soccer America's interview with Byer, "Look to parents, not coaches, to create skillful players," HERE.)