You can bet that Christian Pulisic's Borussia Dortmund bosses -- not to mention his BVB fans -- are very happy with the 19-year-old American as the Bundesliga enters its winter break. 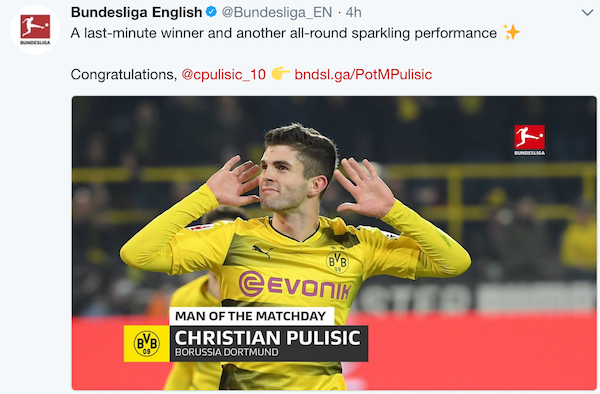 The 54-year-old Bosz, after a 2017 Europa League runner-up finish to Manchester United with a young Ajax squad, disappointed dramatically in Germany. (David Winner, author of "Brilliant Orange: The Neurotic Genius of Dutch Football," wrote in the November issue of When Saturday Comes that the Netherlands "has run out of coaching stars," with the exception of "late-blooming Johan Cruyff disciple Peter Bosz" and Sarina Wiegman, who guided the Netherlands to the 2017 Women's Euro title.)

BVB's choice to replace Bosz through the end of the season raised eye brows, to say the least. Peter Stoeger had been fired by FC Cologne the previous week after presiding over the worst start in Bundesliga history -- a 14-game winless start. But after one practice with Stoeger in charge, Borussia Dortmund ended its winless streak with a 2-0 win at Mainz, which moved BVB from eighth to sixth place.

Game 2 under Stoeger came on Saturday against fifth-place Hoffenheim, coached by Germany's most highly touted coach, the 30-year-old Julian Nagelsmann, whom Borussia Dortmund has reportedly been courting.

Upon leaving the locker room before kickoff, Stoeger yelled jokingly at Nagelsmann, "Don't sit on the wrong bench!"

Pulisic had one of the most least impressive performances of his young career in the win over Mannheim and was subbed in the 70th minute. But Stoeger kept his faith in Pulisic on Saturday against Hoffenheim.

Dortmund did not come out impressively, and Pulisic was no exception as Hoffenheim dominated

As the Westdeutsche Allgemeine Zeitung (WAZ) put it: "He tried a lot, but produced little: His shot while falling was too weak and was easy to save (9th minute). In the most promising attack, he hesitated and took the wrong option (44th minute), which was symbolic of his performance. In the defensive, he left his support man Marcel Schmelzer alone too often."

Hoffenheim went ahead in the 21st minute. Pierre-Emerick Aubameyang equalized from the penalty spot in the 63rd minute. When he made his first substitution, Stoeger yanked the other winger, Andrey Yarmolenko, and kept Pulisic on the field.

In the 89th minute, Shinji Kagawa spotted Pulisic sprinting into the penalty area. Pulisic met Kagawa's pass with a right-foot touch that flicked the ball past Hoffenheim goalkeeper Oliver Baumann and volleyed it home with his left foot. WAZ: "The rather below-average performance was quickly forgotten." 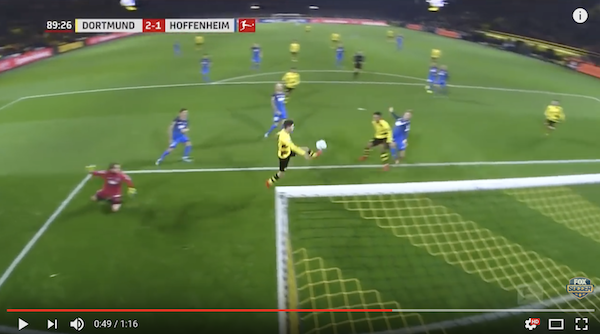 It was Pulisic's third goal of this Bundesliga season, his eighth career league goal in 54 appearances, and arguably his biggest. The headlines that followed included "Pulisic saves Stoeger's home debut" (Spiegel), "Stoeger triumphs over Nagelsmann!" (Focus) and Kicker chimed in with, "Elegant Pulisic makes Hoffenheim look old," a reference to Hoffenheim fielding one the league's youngest lineups.

The BVB victory, combined with a 3-2 RB Leipzig loss at Hertha Berlin while fourth-place Bayer Leverkusen tied, 4-4, in Hannover, moved Borussia Dortmund into third place (thanks to superior goal difference).

For Stoeger, Pulisic delivered a win over the team coached by the man who's been tabbed to replace him. For Watzke and Zorc, Pulisic's late goal makes their gamble on Stoeger look much better.

And Pulisic -- who scored the goal in front of the famed "Yellow Wall" south section where stand 24,500 fans of the 81,000 crowd  -- proved that even when he appears to be slumping, he's still apt to pull off something remarkable.