MLS clubs received favorable draws for the round of 16 of the reformatted Concacaf Champions League. 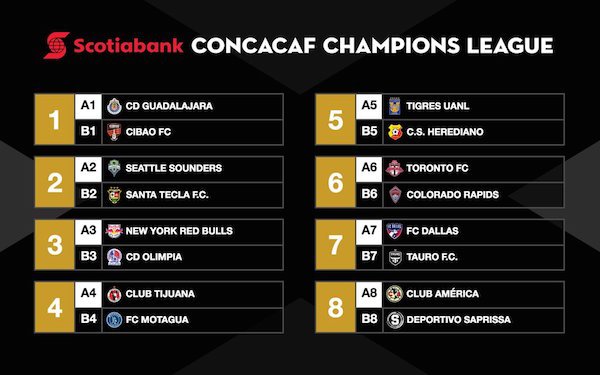 Clubs were placed into two pots based on an index of club rankings from past Concacaf championships, and the top four MLS clubs -- the Seattle Sounders, FC Dallas, Toronto FC and New York Red Bulls -- ranked in the top eight along with the four Mexican teams. The fifth MLS club, the Colorado Rapids, ranked ninth and drew Toronto FC in the round of 16.

The other three MLS teams avoided the two Costa Rican entrants, Saprissa and Herediano, which rank seventh and eighth all-time in points earned in the CCL.

Seattle Sounders vs. Santa Tecla (SLV). The Sounders will tie the LA Galaxy for the U.S. record with their fifth appearance in the CCL.  They reached the quarterfinals in three of four previous appearances and became the first MLS team to oust a Mexican team from the tournament when they beat Tigres in the 2013 quarterfinals. Santa Tecla qualified by winning the Salvadoran Primera Division's 2016 Apertura and 2017 Clausura championships. Los Teclenos, who are making only their second CCL appearance, lost to Alianza, 4-1, in Sunday's final of the 2017 Apertura.

NY Red Bulls vs. Olimpia (HON). Making their third straight appearance in the tournament, the Red Bulls have perhaps the toughest non-MLS opponent in Olimpia, ranked fifth all-time in points with 18 wins, 14 losses and eight ties in nine CCL appearances, the most by an team. Olimpia won the first phases of both stages of the 2016-17 Honduran league and the new Concacaf League, which served as qualifying to determine the 16th entrant in the 2018 CCL.

FC Dallas (USA) vs. Tauro FC (PAN). FC Dallas won its group in 2016-17 and reached the semifinals thanks to a 5-2 aggregate win over Arabe Unido. It will face another Panamanian team in Tauro in the round of 16. In the last of five appearances in the CCL in 2014, Tauro lost all four games in group play. It fell in the semifinals of the recently completed Torneo Apertura in Panama.

Schedule: Play will begin with the round of 16 in late February before MLS kicks off its 23rd season the weekend of March 3-4. The quarterfinals follow immediately during the weeks of March 6-8 and March 13-15. The semifinals and final will be played over four consecutive weeks: April 3-5, April 10-12, April 17-19 and April 24-26.