Charlotte's bid for an MLS expansion bid stalled when local government leaders couldn't agree on a funding plan for a new soccer stadium, but the Mecklenburg County commissioners have turned around and approved a plan to renovate American Legion Memorial Stadium to the tune of $31.7 million. 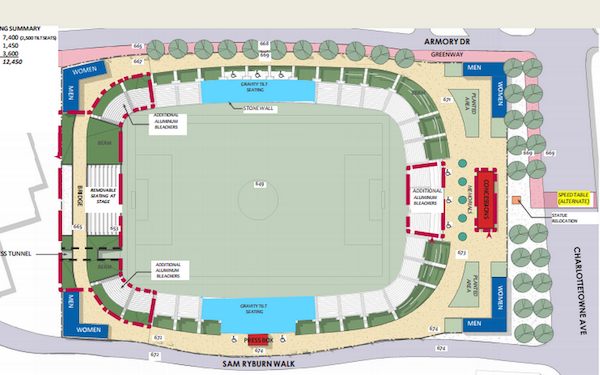 Memorial Stadium could be the new home of the USL's Charlotte Independence if the USL club can reach an agreement with the county. The plan calls for the stadium to hold 12,000 seats when the renovations are completed in two years.

The Independence has been searching for a home since its launch in 2015 and played last season at a 2,300-seat soccer stadium at the Sportsplex at Matthews in Matthews, North Carolina. It was last in attendance in the USL among its independent teams.

Of the 12 expansion candidates, Charlotte was one of the first out of the gate in terms of making progress on a stadium project, but that momentum on a public-private partnership with the City of Charlotte and Mecklenburg County stalled early in 2017.

Charlotte Motor Speedway CEO Marcus Smith wanted to build a soccer stadium at the site of Memorial Stadium (Rodney Marsh's stomping grounds with the ASL Carolina Lightnin'). The MLS group in Charlotte would have contributed half the cost of the $175 million stadium and the other half would have come from Mecklenburg County and Charlotte.

The Independence was not part of the MLS bid.