Left-sided defenders don’t receive the same notice from fans and observers as left wings and left backs, yet are a vital component of a solid team defense.

They are assigned to plug up that channel most teams prefer to attack with right-sided forwards and midfielders, and the best centerbacks can also deliver accurate service up their flank or longer passes to switch play.

The increased use of three-man back lines alters significantly the demands of players stationed wide. A typical centerback chosen for his height and power is not always the right option to cover the larger spaces. Most MLS teams still use a four-man back line as a standard foundation and thus rely greatly on their centerback pairings. A player might switch between central slots during a game or from game to game but most defenders and their coaches prefer to stick to one side or the other.

These rankings do not include wingbacks who are stationed further upfield. They are ranked with the outside backs.

Players who failed to appear in one-half of the regular season games, such as Portland veteran Liam Ridgewell, are not included in the rankings.

The Sounders stumbled at the last hurdle in their quest to repeat as MLS Cup champions, but they actually shaved four goals off their total conceded last year to 39, third-fewest in MLS. A big reason was Chad Marshall, who committed only 12 fouls and took just two cautions while completing 90 percent of his passes. 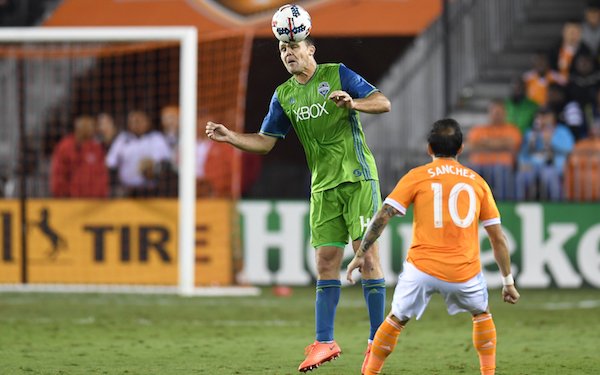 If Victor Vazquez was the missing piece to TFC’s attack, Chris Mavinga morphed into its most important defensive addition. He brought range and speed to the three-man back line and also released wingback Justin Morrow to bomb forward. Mavinga completed 83.1 percent of his passes and with a bit more confidence can improve on the two assists he logged in 2017.

The Quakes’ best TAM deal of the year was German Bundesliga veteran Florian Jungwirth, a defensive mid who played most of the season at centerback. His ranked near the top among MLS defenders with 3.1 tackles and 2.3 interceptions per game as well as a pass-completion mark of 82.7. He also scored two goals and logged three assists.

Teammates Ike Opara (Defender of the Year) and Tim Melia (Goalkeeper of the Year) earned the individual honors in SKC’s remarkable season of conceding just 29 goals, and only slightly less vital was Matt Besler. His pass-completion percentage (85.8) was excellent, he registered four assists, and he averaged 1.5 interceptions per game.

Atlanta United’s pulverizing attack sometimes left its back line exposed. The midseason arrival of keeper Brad Guzan helped shore up the defense and so did improved play by Leo Gonzalez Pirez, whose high incidence of fouls and cautions tapered off down the stretch. He ranked near the top with 3.1 interceptions per game.

The NYCFC defense didn’t get much credit for a second-place finish in the Eastern Conference yet only three teams conceded fewer goals than its 43, which owed much to the steady play of Alexander Callens. Signed in January from Spanish club Numancia, the Peruvian played every minute of the regular season, scored two goals, bagged four assists, and completed 86.3 percent of his passes.

Montreal tumbled out of the playoff tier and one of the causalities was former Defender of the Year Laurent Ciman, who was traded to expansion club Los Angeles FC shortly after Remi Garde replaced Mauro Biello as head coach. After helping Red Bulls II win the 2016 USL title, Aaron Long made the first-team jump and started all but one game in a difficult transition year.