Boxing Day is one of soccer's greatest traditions.

On Dec. 26, fans, many of them wearing proverbial Santa hats, pack stadiums across England to watch soccer. Until the late 1950s, teams also played on Christmas. It was not uncommon for teams to play three games in four days.

Now the tradition is to schedule three games over seven days, on Boxing Day and New Year's Day with a game in between, usually on the weekend. Add in last Saturday's slate of nine games, and that's EPL teams playing four games over as few as 10 days.

What is different about festive fixtures these days is television. All teams don't play at 3 p.m. local time on Boxing Day as they used to. Boxing Day fixtures are spread out over Tuesday, Wednesday and Thursday, and games at 12:30 p.m. and 5:30 p.m. book-end six games at 3 p.m. on Tuesday. The New Year's Day fixture list is the same with games on Monday, Tuesday and Wednesday.

Two other games were rescheduled, one following a protest by fans, the other at the insistence of local authorities. The EPL originally wanted to play Arsenal-Liverpool at 4 p.m. on Christmas Eve, but fans were so upset about it interfering with Christmas Eve festivities that it was played last Friday. The London derby between Tottenham and West Ham United at Wembley was moved from Sunday to the following Thursday because there won't be enough security forces available on New Year's Eve.

The effect of the rescheduling of the two London games is that the festive season features games on 11 days over a 14-day period. In an otherwise fallow period for international sports, that's 11 days of the EPL soccer on international television, where the EPL's annual revenues now top $1 billion a year.

Until recently, the EPL had the festive period to itself. In recent years, the NBA has become competition. On Monday, it shared the sports air waves with the NFL in the United States, but its five games on Christmas Day -- including a rematch of the NBA final between Golden State and Cleveland -- gave it a virtual monopoly on sports television internationally. 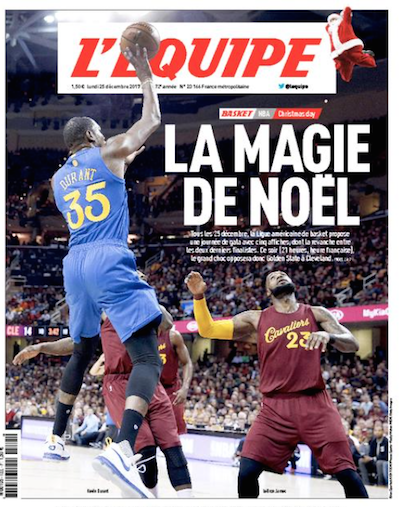 Desperate to improve its standing internationally, Serie A has seized the opportunity to win holiday viewers and postponed its mid-season break until January in order to play league matches on Friday (a single game featuring leader Napoli) and Saturday (nine games).

"The concept is simple," Roma executive director Mauro Baldissoni told the AP. "Professional soccer is an entertainment product and offering it during the holiday period is a great opportunity for those in charge. The Premier League has shown that it works to offer this product during the holidays — both in terms of stadium attendance and international TV viewership."

Rivals to the EPL have seen how it has made big money for its clubs via international media rights, and they are working hard to boost their image abroad. Serie A's latest international rights deal with IMG will generate $440 million a season, almost double the previous deal with MP and Silva.

Catering to the international television market means La Liga scheduling Real Madrid-Barcelona at 1 p.m. last Saturday for it to air in prime time in Asia and this Saturday's Lazio-Fiorentina game kicking off at 9 p.m. for prime-time viewing across Europe.

Veteran Italian coach Fabio Capello, who is now working in China, blasted the late kickoff, telling La Repubblica that Serie A should model the EPL and its afternoon games on Boxing Day and not play evening matches that are an inconvenience to fans wanting to attend them.

But spread out over five time slots on two days, Serie A's 19th round -- the final round of what has been an unusually tight first half -- will draw plenty of international viewers who might not otherwise tune in, something that it finds hard to pass up.