On replacing warm-ups with a pill

NBC’s coverage of EPL games regularly features occasions when we’re transported early to the stadium, way before kickoff. Both teams are on the field, usually in track suits, going through their various warm-up routines.

I’ve taken to studying these warm-ups as closely as the cameras allow (they keep cutting away or giving us close-ups of an individual player). My interest is hardly professional. Frankly, I don’t give a damn what the players do during their warm-ups, but I do find it amusing to watch the way that the gymnastic exercises vary from team to team. 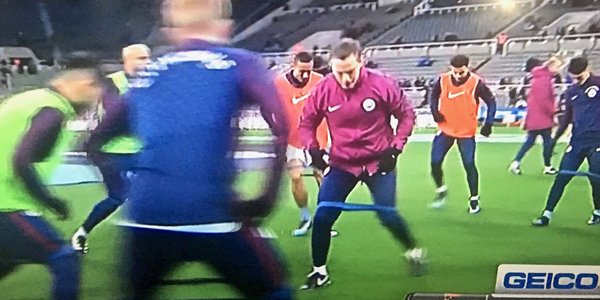 Some deploy in circles, some run in straight lines, some do little leaps, others zig zag, suddenly sprint, or raise their knees, or stoop down to touch the ground, while others fling their arms towards the sky. There is even some referee-type running backward. I think I’ve even seen some cones in use (a bit jarring that, as cones have a reputation of being old-fashioned).

Standing more or less at the center of things is the ring-master physiotherapist, doing all the exercises -- indeed putting more into them than most of the players do -- and most probably admiring his own choreography.

I have no doubt that each physio designs his own routine -- it is, really, quite similar to a dance. But the main requirement, I suspect, is that it be different from everyone else’s. Which ought to mean that one of these routines is better than all the others. Yet I doubt that -- because after watching all these apparently different warm-ups, it seems to me that they’re really all the same, all basically simply running to and fro and jumping up and down, but not too strenuously.

Which means they all work equally well. Or maybe none of them works. The possibility that warm-ups might be superfluous has been raised before, but it’s clear that warm-ups will be around for a long time -- one of those things that no one would dare not to do because everyone else does them.

And now comes the news (surely we’ve known this was coming?) that all that prancing about may be joining the cones as something that’s “not done any more.” Totally unnecessary. Not because it doesn’t work, but because it can be replaced by a pill -- The Exercise Pill, as an article in a recent New Yorker magazine called it.

As so often, mice were the first to sample the benefits, or otherwise, of the exercise pill, which doesn’t yet have a name, only a research number GW50516, usually shortened to 516. In San Diego’s Salk Institute laboratory mice treated with 516 rapidly increased the time they spent spinning around in the exercise wheel by as much 75 percent.

All that extra exercise showed in a rather human way. While mice would not normally be thought of as having a waste line, the lab boffins measured the “cross-sectional area” and found it decreased, along with the body fat percentage.

All of that news was published in 2008, but these things take a while to catch on. There seems no reason to doubt that 516 is now well and truly established as a performance-aid drug for athletes.

You can tell that it is showing up well on that front, because the World Anti-Doping Agency (WADA) was quick to add the drug to its banned list, and to start testing for it -- back in 2009. Five-one-six -- strongly disapproved by WADA -- has yet to be approved by the U.S. Food and Drug Administration. As the New Yorker reports, for 516 (still nameless) to acquire the respectability of FDA approval, there needs to be proof that it is an effective treatment for a recognized disease -- recognized by the FDA that is. “Lack of exercise” does not qualify.

As to how 516 works, let’s just say that it appears to mimic the effect of exercise-training -- which means that athletes or Sunday-morning joggers who take it can run longer before their muscles start to complain -- before they hit the dreaded wall.

Which is cheating as far as WADA is concerned.

When the time arrives for the FDA to pay serious attention, it won’t be just 516 applying for a license. Other scientists, in other labs, are proceeding merrily with their own versions of an exercise pill. Exercise hormones are being discovered, irisin for one. And Compound 14 is a competitor from England -- discovered rather serendipitously during research on an anti-cancer drugs.

For the moment, the not-yet-licensed 516 is -- inevitably -- available on line. Presumably it’s a risky buy, there will be no checks on purity of product yet, nor dosage schedules.

Dosage is obviously of the greatest importance. As far as my rather paltry research on warm-ups goes, I’m thinking that, as those exercises are deliberately of the low-energy type, then a pretty small dose of 516 should be able to emulate them. That will not alter WADA’s stance, which is one of zero tolerance for everything they disapprove of (and that, believe me, takes in a lot of compounds, both ones that actually exist, and others -- usually conceivable derivatives -- that have yet to be synthesized).

I guess I’ll stick with WADA with this one. Not because I necessarily agree with the puritanical rigidity of its judgments, but because I want to continue being amused by these soppy warm-up ballets. The thought that they might disappear, that the players would turn up at the stadium half an hour later, having already “warmed-up” by taking a baby-dose of 516 does not sit well with me. The sport needs all the human touches it can find.

england
10 comments about "On replacing warm-ups with a pill".
Read more comments >
Next story loading