Soccer in the inner cities, the missing link between recreational and competitive soccer

Although you cannot pinpoint to the mission statement of U.S. Soccer in its website right away like it should be with any organization of this magnitude; you can eventually find the following mission statement:

“To make soccer, in all its forms, a preeminent sport in the United States and continue the development of at all recreational and competitive levels.”

Another metric that is used around the world to judge the success of the soccer federations is the NTs success and FIFA rankings. The current ongoing change process in the presidency of U.S. Soccer was triggered by nothing but the failure of the USMNT to qualify for the WC 2018. This message should be well perceived by the delegates voting at the AGM in February if we want our MNT to be one of the best in the world as well as keeping the top status for the WNT.

There is not too much correlation and passage between recreational and competitive soccer and one can easily say that quantity does not automatically yield quality. Iceland for example with a population of 330,000 qualified for the WC from Europe. The Japanese WNT which is ranked 9th in FIFA rankings and which won the WC in 2011 chooses its WNT among only 35,000 registered players. (Japan has a population of 126 million.) On the other hand, USA MNT, which did not qualify for the 2018 WC, has more than 3 million registered men players.  Unless U.S. Soccer defines the link between recreational and competitive soccer, recreational soccer will not serve its developmental purpose.

Recreational soccer has two functions in the USA. The first one is social engineering. Through soccer kids are propelled for a better and healthier lifestyle as well as trying to create better citizens. The second one is to create the monetary basis of pay-to-play soccer business which is worth billions of dollars. Although economically and socially both functions are praise worthy, they will not necessarily by themselves generate a successful competitive base for the NTs.

On the other hand, a recent survey by Aspen Institute shows a steady decline in soccer participation for children from the ages 6 to 12 in the last eight years. This is not specific to soccer: All team sports take their share in this decline. Naturally, this decline will negatively affect the social engineering aspect of recreational soccer.

It is obvious that recreational soccer in our country in numbers and in business is well, alive and kicking. There are two problems: One is we do leave out underprivileged children who cannot afford the cost of the pay-to-play system. Especially Latinos who grow up in a soccer culture is a demographical group we miss. Underprivileged children who cannot afford to pay to play exist mainly in inner cities as well as some suburban areas. The border area with Mexico, which is not urban, is full of such talent also.

The other one is the problem is to properly develop kids from the ages of two to 12, identify and funnel the talents into a competitive and elite system and create the correct environment (pro and semi-pro leagues) to enhance their skills. This is where we are failing although we do have a correct elite pathway for U12-U18 in the Development Academies (DA). DAs, unfortunately, only embrace only 20,000 talented players.

U.S. Soccer should have a three pronged approach:

1) Present an alternative to Pay-to-Play development method by changing the incentives of youth clubs;

2) Increase the socio-economic diversity within youth development ranks starting at the recreational level;

Inner city is an area we must focus on. We should create the correct environment for the inner city U10 and below kids. Recently, there have been some interesting projects spearheaded by U.S. Soccer Foundation to bring in the inner-city kids into the soccer system. It aims to bring in one million kids into the system by building 1000 mini-pitches by 2026. The concept of using mini-pitches as part of a development process surfaced about 20 years ago with UEFA’s Hat-Trick project. UEFA funded its members to build these mini-pitches. Unfortunately, only Germany used the concept of mini-pitches effectively as an integral part of its youth development program. U.S. Soccer should do the same as outlined below if it wants to utilize the concept for development of soccer. 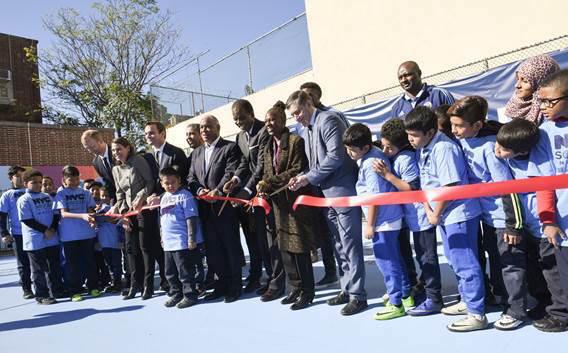 There are other inner city projects in the USA.

1) Soccer in the Streets (Atlanta)

Most of those projects use the city’s or ISD’s facilities. All of them have a philanthropic cause and are social-engineering projects. Naturally, since U.S. Soccer is not involved directly with these projects, none of them has the primary goal of being part of our soccer development system. Unless the City or the ISD is involved with such pcojects there will be maintenance and security issues for the facilities in inner cities.

The mini-pitches can be good incubators for the U10 age groups. In a way, they will simulate street soccer that never existed in our country.  They will replace half basketball courts used to develop the best basketball players on the planet for the development of soccer players.

There are three pillars to soccer youth development: Facilities, organization and human resources (players, coaches, medical staff etc.). The current projects do deliver the facilities in one form or the other. The neighborhoods provide the players. What are missing are the coaches and the organization. Although most of those projects do talk about coaching in different contexts, there is no one single approach to coaching in these projects.

To cut the long story short, U.S. Soccer should take the responsibility of the organization pillar of the inner city soccer development -- including providing part time appropriately licensed coaches. Absorb, integrate, and revolutionize the youth development model within the urban core. Networking the efforts of all the stakeholders (parks & recreation, schools, city/state/federal, U.S. Soccer Foundation, charities, sponsors and parents) should reduce the costs. Establishing a national network will attract sponsors and with WC 2026 bringing the spotlight to America’s game 0– what better showcase moment.

Naturally, the same pitches can be used for various purposes like small-sided games for adults, but for the U10 kids the use of the facilities under the organization of U.S. Soccer should be an integral part of the national youth development program. Unless this is done, these projects will only serve their social engineering side of the project and contribute to recreational soccer not to competitive soccer. Inner-city projects can be the missing link between recreational and competitive soccer.

The inner-city kids can only be an asset to our NTs if U.S. Soccer takes on the organizational responsibility of these projects. Inner-city projects could and should be our future incubator for the soccer stars of our country.