MLS's first two major events of the year are the adidas Combine Jan. 11-17 in Orlando and SuperDraft Jan. 19 in Philadelphia, but the annual draft dominated by college players is playing a diminishing role in how MLS clubs build their rosters with players acquired from North American sources.

MLS Rosters: Who's in and who's outLess than 50 percent of all players on MLS rosters as of Jan. 1 who first entered MLS from North American teams -- 144 of 289 players -- were selected via the SuperDraft:

Less than a quarter of the players selected in the last three SuperDrafts are still in MLS, and that includes five players who began their careers in the USL.

Almost all the best collegians who have come out of the SuperDraft in recent years weren't Americans: Canadian Cyle Larin in 2015, Englishman Jack Harrison in 2016 and German Julian Gressel in 2017.

That trend should continue as most of the underclassmen expected to be given Generation adidas contracts are foreigners. 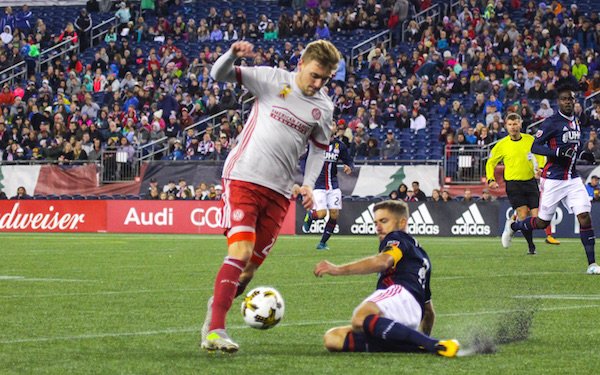 MLS's Homegrown program is less than a decade old but already it accounts for almost 30 percent of the active players acquired from North American sources (colleges, academies and increasingly USL second teams).

Of the eight players who played in the USA's 1-1 tie with Portugal in November, the first of the rebuilding era following its elimination from the 2018 World Cup, and began their careers in MLS, six were Homegrown signings, including young stars Kellyn Acosta and Tyler Adams.

The newest trend is for MLS teams to park academy players on their USL teams and then sign them to first-team contracts. Adams, for one, started out with Red Bulls II at the age of 16 in 2015.

The biggest change in recent years is the number of players whom MLS teams have signed from the USL, many again from their second teams.

Many of the players are young foreigners like Nouhou Tolo (Cameroon) and Jordy Delem (Martinique), whom the Seattle Sounders promoted from S2 and got important contributions from en route to the Western Conference title.

Five of the nine NASL products who migrated to MLS came when Minnesota United and Montreal moved to the league as expansion franchises. The most recent NASL player who moved to MLS is two-time MVP Stefano Pinho, who signed with Orlando City for the 2018 season.

Occasionally, players -- usually goalkeepers -- will go undrafted but latch on to MLS teams. That's the case with two of the New England keepers, Brad Knighton and Matt Turner.

Foreign pipeline. Not included here are Americans who began their careers abroad but have returned to MLS. They include the likes of young stars Paul Arriola (D.C. United) and Zack Steffen (Columbus) and veterans like Lee Nguyen (New England).