The Importance of Being an Assistant Referee

I started refereeing in New York in 1978. One of the things that was interesting about refereeing is it was very much an individual pursuit for me as nearly all games in New York in the 1970s and 1980s, with the exception of semifinal and final games, plus a few other notable games, were officiated by one referee with the help of two club linesmen, who simply raised the flag when the ball was over the touchline. And the individualism of this was attractive to me, perhaps because I'm an only child.

In that same year of 1978, the Major Indoor Soccer League (MISL) kicked off its inaugural season, starting play with just one referee on the field. I was a spectator at the inaugural game on December 22, 1978, and Joe Machnik had the very challenging role of being the only official on the field.

How was it possible that games were adequately officiated with just one ref? Impossible, because they were not.

I can tell you that in the youth and adult games that I refereed, I certainly missed my share of calls, especially close offside decisions, which team should be receiving the throw-in, or not whistling a foul when I was concentrating on offside instead.

When I briefly lived in Florida in the late 1980s, I officiated in Orlando and Tallahassee and all games U-13 on up had one referee and two assistant refs, which were still called linesmen back then. And I thought how after I return to New York, refereeing is going to again become more challenging as I will be going solo again. Well, in New York we kept at it with all these certification courses and retainer programs and we now have enough officials so today, it’s the same situation as when I lived in the Sunshine State, one ref with two colleagues, now called assistant referees, for U-13 on up. 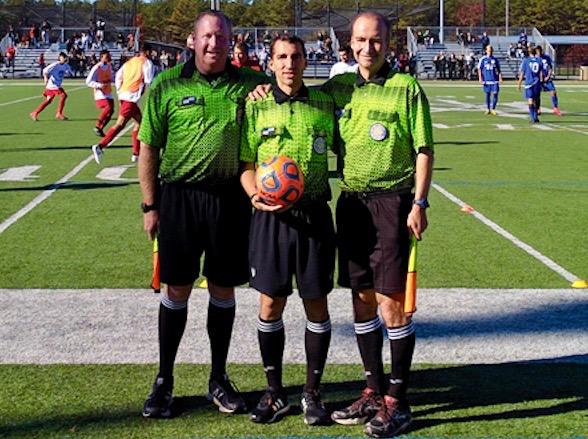 But there are officials who do not want to be an assistant and will often say, “I’m just an AR.” That is the worst attitude you can have and I would much rather go back to reffing solo than have two ARs with that view as I am counting on them to make important decisions, such as applying the subtleties of the offside rule or signaling a foul near them. Conversely, ARs who are passionate about what they are doing in assisting me as the ref make my job so much easier.

As the years have gone on and I’ve become older, I find myself on the line more and more although most of my games remain in the middle. And I sometimes have as much or even more influence on the game as an AR as I do as the ref. Take a recent boys U-16 game as an example. Green won the game over white, 4-2, but green had two other goals, one in each half, nullified by offside as the goalscorer was just offside (less than a yard) at the time the ball was passed to him.

There was not a caution, send-off or PK in the match. Of the two free kicks whistled just outside the penalty area, I signaled one of them outside the corner of the penalty area when a defender charged an attacker who was on the ball and with his back to the goal.

Law 6: The Other Match Officials

There are so many more examples to write about here when, as AR, I’ve made very important decisions. Yet the attitude of “just an AR” does not just apply to officials as it’s often the attitude of many players, coaches and spectators as well. I can understand some of the rationale behind this view as the title is “assistant,” the AR is not actually on the field and is generally paid half the fee of the ref in games under the U.S. Soccer umbrella.

In the thousands of games I have refereed, I’ve heard many opinions of my refereeing, both good and bad, after the match with people giving an example of a decision or two made during the game. I never had this happen to me as an AR in my 1,000-plus games as an assistant.

Worse, I’ve been asked time and time again by people used to seeing me as a ref but in the role as AR instead for their game, “Randy, did you get a demotion?”

So I’m asking Soccer Americans to notice the ARs and see how they can make the ref’s job easier or more difficult by their attitude and how they do that game. And if they notice the AR did very well, go out of your way to say to him or her after the game, “Great job, AR!”