Two years after he joined Scottish club Hearts from D.C. United and sixteen months after he was named Hearts captain, 25-year-old Perry Kitchen is leaving Europe to return to MLS with the LA Galaxy. 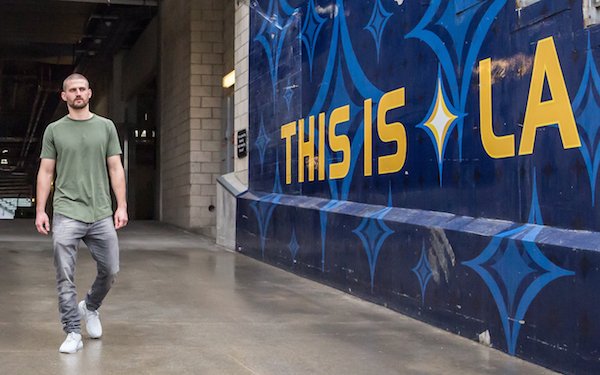 Photo courtesy of LA Galaxy.
The LA Galaxy acquired the rights to Kitchen by trading $100,000 in General Allocation Money and $200,000 in Targeted Allocation Money to D.C. United. Since United made him a contract offer when he left as a free agent, it held his MLS rights.

“Perry has proven himself to be a top midfielder in Major League Soccer during his time with D.C. United,” said LA Galaxy head coach Sigi Schmid. “He has continued to progress during his time in Europe and we are confident he can bolster our midfield. At only 25 years old, Perry is already an MLS veteran and will be a great addition to the LA Galaxy on and off the field.”

Kitchen exited Hearts last summer when it became clear he didn't have a future at Tynecastle Park, but he only stayed half a season at Danish Superligaen club Randers FC.

Kitchen joined a small group of Americans who have captained European clubs: Claudio Reyna at Wolfsburg, Kasey Keller at Borussia Moenchengladbach, Brian McBride at Fulham, Gregg Berhalter at Energie Cottbus and 1860 Munich and perhaps most notably, Steve Cherundolo for four seasons at Hannover 96.

His fortunes changed following a change of managers: Robbie Neilson left the Jambos for English club MK Dons in December 2016 and was replaced by Ian Cathro.

The writing was on the wall for Kitchen when Cathro announced that new signing Christophe Berra would replace Kitchen as captain for the 2017-18 season. (Cathro himself left Hearts shortly after Kitchen did as he was fired.)

Kitchen signed a two-year contract with Randers for which he played nine games in the fall.

He will play a key part of the Galaxy's rebuilding effort, joining Jonathan dos Santos and Joao Pedro in midfield.