A wonderful side of soccer -- helping kids feel like they belong

Gerardo Mercado is a 19-year-old Salvadoran who arrived to the United States in 2013, just before the height of the United States’ unaccompanied minor crisis -- when tens of thousands of children and youth began crossing our southern border without papers or parents, looking, like Gerardo was, for safety and a chance to start anew. 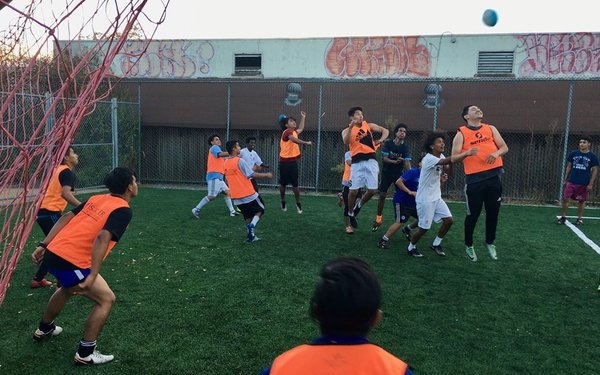 Soon after crossing the Rio Grande, Gerardo was apprehended by the authorities in Texas, and, because he was a minor, put into a youth detention facility in Texas; soon after, he was released to the care of his mother, who had lived for several years in the United States, in Oakland, California.

As required by law, Gerardo enrolled in school -- at Oakland International High School, where I work -- but it was difficult for him to concentrate in class.

He didn’t speak English, for one. He’d also experienced a lot out on the road on the way to the United States and, though his community in El Salvador was on the safer side, gang violence was taking over his country. He had heard about the violence -- extortions, rapes, robberies, murders -- every day on the news and from his friends and community members.

The only thing that he liked about school those first few months was soccer.

“The coaches would come up to me, invite me to come play, and it would just be fun and relaxing to be out there on the field with other people,” he said. Oakland International’s soccer program is run by Soccer Without Borders, an organization whose mission “is to use soccer as a vehicle for positive change” in the lives of newly arrived immigrant youth in the United States. “I felt welcomed, and like I could belong.”

But the debt weighed on him, as did the frustration of not understanding what was going on in class. He found a job washing dishes in a restaurant; working all night made it too hard to get out of bed the next morning and come to school. He dropped out. School administrators -- like me -- had tried everything we could to keep him in school, we felt, and after he dropped out, we thought we might never see him again.

He was out of school for a whole year, working the night shifts. He was able to help his family and pay off his debt. But the work was hard, and he began to picture a life of washing dishes forever. Against all the odds, Gerardo decided to come back to school.

While his return was triumphant -- it is very rare for a student to drop out for so long, and then return to school -- it was also difficult. He had the same challenges in class, and the same frustrations. He had vowed to make a change in his life, but that change didn’t come easily.

“But I had soccer,” he said, to help him stay connected to the school -- and to stay in school, period.

Soccer was something that, unlike English or math class, he felt good at. It was fun. Being out there on the field allowed him to forget, for a while, about the challenges he had faced and was facing.

“When you’re new to this country, and you don’t speak the language, and you have stress at home, and so many things to think about, being on the soccer field is a release,” he said.

While Soccer Without Borders trains young immigrants in the principles and mechanics of the game, the real work lies in support students to feel connected to one another, to positive, caring adults, and to their new homes.

“It’s a program that really helps people,” Gerado explains. “It sees you, it encourages you to participate, to work together. People are watching out for you. You’re welcome there -- and there are no prerequisites, just that you come.”

So much political rhetoric surrounding migration hinges around exclusion, a bottom line of us vs. them. But this exclusion comes at great cost to communities. As I wrote in The New York Times earlier this year, “Quality public education is a fundamental, if aspirational, American value … Investing in newcomer education makes practical sense. It costs far more to lock someone up for a year than it does to educate him.”

I’ve worked with young, newly arrived immigrants to the United States for over a decade, now, watching students struggle to rebuild their lives in their new homes, find belonging, and cast a bright future for themselves out of the shards of their past.

Young immigrants coming to the United States at this moment in time have it perhaps harder than ever; whether from Syria or El Salvador, Burma or Bhutan, Mexico or Afghanistan, they are often fleeing untenable circumstances at home -- war, protracted refugee crises, endemic poverty, pervasive community violence, and other catastrophes no child should ever have to face -- and, once they arrive in the U.S., face mounting xenophobia, regressive immigration policies, and scapegoating of societal problems. How can these young people not be afraid? How can they feel like they are actually welcome here?

Soccer Without Borders has an answer to this: create a space of belonging, of achievement, of connectedness, and of belief in oneself and ones teammates. Create a family. Create a home.

Last Spring, Gerardo graduated from Oakland International High School near the top of his class, winning “The Spirit of Oakland International Award,” and a scholarship to help him offset his costs at community college. He’d beat all the odds, and his teammates and coaches were there to cheer him on.

What had kept Gerardo coming to school? For the first year or so back, it was entirely Soccer Without Borders’ program. “I felt known there,” he said. “I felt welcome, like I belonged. I felt at home.” 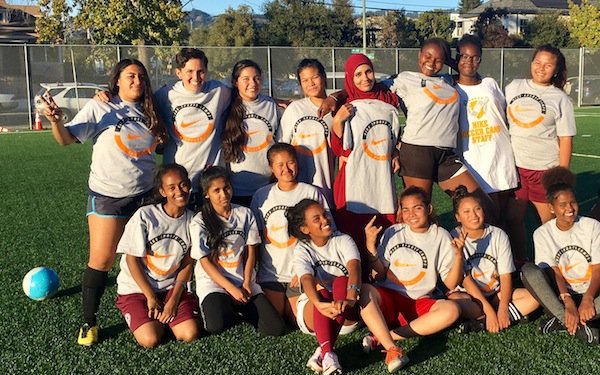 Come to Oakland International High School any day after school, Tuesday through Thursday, and you’ll see Soccer Without Borders’ teams out there on our misshapen field, students from dozens of countries, speaking just as many languages. Girls in hijab, young men awkward in puberty.

Some of them are experts with the ball, knowing just how to move it down field as though in a choreographed dance with their teammates; others haven’t yet learned to play on a team and still want to dribble the ball toward glory, time and time again; others still have never played soccer at all. But come to the field looking for camaraderie, a place to belong.

(Lauren Markham is the author of "The Far Away Brothers: Two Young Migrants and the Making of an American Life" -- Penguin Random House, 2017. Markham's work has appeared in outlets such as VQR, VICE, Orion, Pacific Standard, Guernica,  The Guardian, The New Yorker.com. She can be followed on Twitter at @LaurenMarkham_)

NOTE: Soccer Without Borders was awarded the 2017 FIFA Diversity Award.