A soccer parent for 20 years: What I'll miss most

In the pre-dawn damp and cold of a Saturday morning in the fall of 2016, as I drove on a county road south of Atlanta, with my 17-year-old son half asleep in the passenger seat, I understood how much I would miss it.

Twenty years as a soccer parent would end with his last club and school games in the spring of 2017. 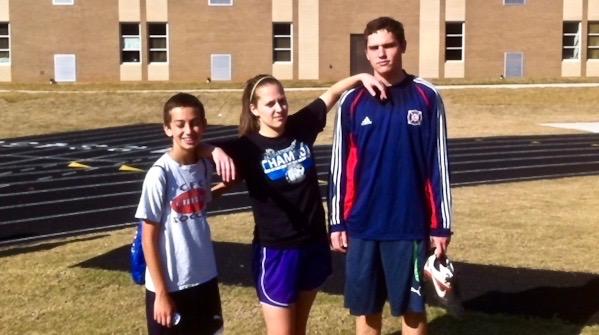 Ronen, Maayan and Eyal after a 2012 pickup game.

I would miss the drives to and from their club games, and those precious opportunities for conversation with my daughter and her two younger brothers.

I would miss shivering in the cold, getting soaked by the rain, being frozen and wet at the same time, broiling in the Southern heat, even the onslaught at a gnat-infested field.

I would miss the post-game meals -- fast food if we were in a hurry, or maybe a diner or barbecue.

I would miss the wet, malodorous uniform pieces in the trunk, along with soaked cleats stuffed with newspaper to absorb the moisture.

I would miss Saturday morning's search for uniform parts (the suggestion that this be done Friday night having been ignored) and Saturday night's laundry to wash uniforms for Sunday's games.

I would miss cringing as my goalkeeper daughter slid feet first and gathered up a ball, apparently impervious to the possibility of collision with the onrushing attacker.

I would miss my oldest son's highlight reel of goals, especially the direct kicks, and the field vision that allowed him to direct his teammates play.

I would miss my youngest son's perseverance, never losing his love of the game, as his body finally grew into his abilities.

I would even miss my wife's dismay about the time soccer took from our family engaging in other activities -- though I sometimes wonder whether Audrey wasn't right.

(Note: The same woman who read the newspaper at her children's games now wears an Atlanta United FC jersey and stands cheering throughout their games.)

As a boy, I read the agate type in the Sunday sports pages of The New York Times and found such exotic names as Manchester United, Borussia Monchengladbach, Real Madrid and Juventus.

Growing up near Chicago, the first person I knew who played soccer was an 8th grade classmate.

I wrote my first article about soccer at age 14, about the star forward on my high school's team. My senior year, I called a few games on the high school radio station, including a 3-2 state championship loss. Soccer on radio, circa 1972.

I wrote about the soccer team for my college paper and occasionally turned out for practice, wearing borrowed cleats, doing a passable imitation of an orange cone.

I had little contact with soccer as I started my journalism career and then married life.

That changed the day my wife registered our 7-year-old daughter to play at the club nearest home. She saw boys chasing a ball and thought that soccer also would be ideal for our 5-year-old son, a child of above average size and energy.

Several years later, when our youngest began playing at age 5, he wore hand-me-down shin guards that flopped from his legs.

For 20 years we wrote checks (the "pay" in "pay-to-play") to clubs and camps; bought countless uniforms, cleats, shin guards and goalkeeper gloves; penciled in weekday practices and weekend games; did our snack duty when the kids were young and occasionally fed their teammates when they were older.

I have not -- and frankly am afraid to -- estimated how much money we spent on soccer those 20 years.

Hundreds of mini-dvd tapes of the kids' games are boxed in the basement, waiting to be edited and transferred to a more durable format and given to the them.

When he was 7, I asked my oldest son if he could hear the parents hollering from the sidelines. He said that he didn't want to hear me during his games.

So I sat in my folding chair, restraining (most of the time) any inclination to vocalize.

Eventually, I brought ear buds with me and listened to music. When I tired of parents screaming -- at their children, at other children (sometimes on the other team) and at referees -- I turned up the volume.

I witnessed parents, in club and high school, pick verbal battles with players on the opposing team, in one case even throwing a water bottle at a U-14 boy after he suggested that the woman in question pipe down.

I have heard boys and girls tell parents on their own team to be quiet.

Maybe there should be a 1,000 game rule: Unless you have watched (in person or on television), played, coached or officiated a total of 1,000 games, hush up and let the referees (men and women, boys and girls, usually being paid $15 to $25 a game) call the game and accept that they will make mistakes.

I never complained to a coach about my child's position or playing time, not at youth clubs, high school or college.

I watched parents move their children from club to club, seeking supposedly greener pastures, and develop reputations that did their offspring no good.

When the professional coaches at our first club, a father and his twin sons (whose 'development first' approach we liked), left in a dispute with the board (there are no politics like soccer club politics), we eventually moved to the club they founded.

Our older son, who "played up," changed clubs when there was no team in his age group and again as he reached higher levels.

Soccer took the older boy on a club trip to England, to a soccer and language camp in Spain, to 3 v 3 pick-up games in a city plaza before a World Cup game in Germany (beware the Bar Mitzvah present you promise years in advance), and to the NCAA Division II nationals. He visited Argentina and Brazil with Maccabi USA youth teams at the Pan Am Maccabi Games and played in the quadrennial Maccabiah Games in Israel.

You have to catch yourself when your 7-year-old son does a step-over and dribbles past an opponent -- and suddenly you're daydreaming.

I can count on two hands, with a few fingers left over, the number of players my children played with or against who went on to play professionally.

In the "pay to play" world, the grail is a college scholarship. The recruiting process can be exhilarating, until you discover what an unseemly business it can be, when assurances of scholarship money and starting positions fade, leaving you angry and your child confused.

When they began playing, the kids' coaches were well-meaning parents whose own children were on the team. Their coaching abilities ranged from the clueless to the reasonably capable.

In hindsight, at the youngest ages there was too much emphasis on organized drills and not enough time spent letting the kids get comfortable with the ball at their feet. The latter may look less organized to unknowing parents, but in the end, has greater value.

Many of our older son's skills were developed banging balls off the garage walls.

His more professional coaching began about U-8, oddly enough by Scots who had played professionally in England (the aforementioned father having had a distinguished career).

Only a few of the coaches, at the club or high school level, including for our daughter, were women.

I have seen too many boys and girls coached by men who berated players during games or whose egos seemingly prevented them from remembering that these were children and this was a game to be enjoyed.

We suffered relatively few of that variety.

Our older son had a club teammate, with whom he had a wonderful compatibility on the field, who came from Mexico at a young age, with his parents ... illegally.

Another teammate's family shepherded him to practice and games and made sure he had uniform parts. His own parents worked seven days a week and never saw him play.

I sometimes found the three boys at our house, kicking a ball, ransacking the refrigerator or crashed out in the living room, playing FIFA, or watching a game or a movie.

When his legal status prevented the immigrant teammate from going on the team trip to England, our son understood that he was fortunate to be living in other circumstances.

With our youngest now a college freshman (still refereeing and playing pickup soccer), this past autumn was the first in 20 years free of soccer -- aside from those Atlanta United games (and all the soccer available on television).

Years ago, on a website frequented by soccer parents (some clearly over-invested emotionally), I read the thoughts of a mother who was hanging up her cleats, so to speak.

Beyond anything else, what she said she would miss most was the drives to and from the games, those chances for one-on-one time with her children.

I didn't realize it then, but she was right.

That's what I would miss most.

(Dave Schechter is an Atlanta-based freelance writer. His journalism career began on a junior high school newspaper and included more than 28 years with CNN. He was correct the third time he predicted that soccer would take hold in the United States. At present, his Premier League fantasy team is having a disappointing season.)