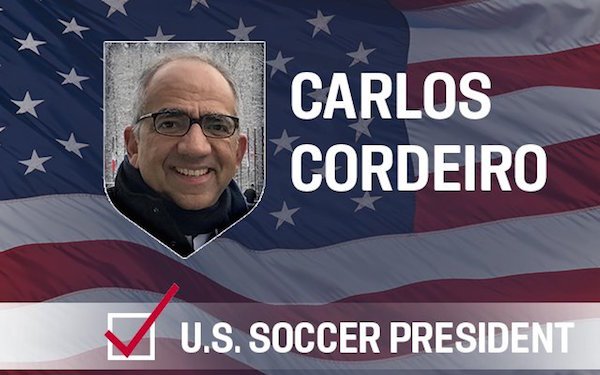 New U.S. Soccer president Carlos Cordeiro gets right down to work this week with a meeting of the 2026 World Cup bid committee on Tuesday and then his first trip to Soccer House in Chicago since his election.

They reflect the dual tracks Cordeiro will have to work on as he starts his new job. He'll be pulled in multiple directions to address short-term issues. But they don't begin to get to the heart of unhappiness of the membership that was evident in the election that wrapped up on Saturday in Orlando.

Cordeiro envisions his role as U.S. Soccer president as similar to that of a chairman of a board of directors, much different from the hands-on role played by Sunil Gulati, but he'll have lots on his plate to start, beginning with the 2026 World Cup bid.

Much of Cordeiro's work over the last decade has been internationally. He served as an informal foreign minister for American soccer and holds important committee positions at FIFA and Concacaf. He'll be immediately pulled in that direction as the USA, Canada and Mexico work to nail down the hosting rights to the 2026 World Cup.

The bid is due on March 16 and then the three-month campaign to win support around the soccer world shifts into high gear. The orderly transition from Gulati to Cordeiro, the vice president, will be viewed favorably in FIFA circles.

Cordeiro is on the bid committee, so all this work is right up his wheel house, but he'll need to be careful to not exacerbate the perception of some that he's more interested in affairs outside the United States.

It should be a no-brainer that co-hosting the 2026 World Cup -- and the eight years of promotion leading up to the tournament that come with it -- would be a great thing for American soccer, but everyone in the membership doesn't share the view that the World Cup should be a priority, just as some members don't view issues surrounding the USA's elimination from the 2018 World Cup as important to them.

That's not how Gulati, the chairman of the bid committee, and Cordeiro, who both worked on the failed 2022 World Cup bid in 2010, would see it. And they have a point. Just imagine the reaction if the USA, Canada and Mexico lose to Morocco on June 13, a day before millions of American will wake up to the realization that the World Cup is starting in Russia and the USA won't be there.

That's all enough to keep Cordeiro busy for the next four months, but he also has to address a host of other issues:

-- National team GMs. The federation board has approved positions for men's and women's national team general managers. U.S. Soccer secretary general Dan Flynn said the federation has already identified some candidates and he will go over with Cordeiro an outline for the process to select the candidates.

Only after the World Cup in July will the full pool of coaching candidates be known though you could make the same case about the GM position with someone like Dutchman Dennis te Kloese, the director of Mexico's national teams who worked in MLS and knows the U.S. system well.

-- Governance matters. One of Cordeiro's first tasks will be to call his first meeting of the board of directors, which will be short two members. (Gulati stays on the board in the non-voting position of immediate past president, replacing Dr. Bob Contiguglia.)

The federation by-laws are silent about filling the position of vice president, which will require Cordeiro to either call a special meeting of the National Council or wait until its next regularly scheduled meeting in 2019.

The decision on an independent director to replace Donna Shalala, who finished her term on Saturday, was postponed at the January board meeting so it could be decided when the new president is in office.

Flynn, another non-voting board member, will remain as secretary general though there has already been a lot of speculation about a possible successor for the federation's CEO role that will take on greater importance in the management structure Cordeiro envisions.

The person often mentioned during the AGM as being interested in the position is John Collins, a Chicago-based attorney and at-large board member.

-- Lawsuits. Cordeiro was elected president immediately after the federation was hit with two new actions in the ongoing legal battle backed by billionaire Rocco Commisso, the New York Cosmos owner and NASL board chairman who also supported three candidates in the election.

Hope Solo, one of the eight candidates for Gulati's position, filed a complaint with the U.S. Olympic Committee against the federation, contending it is in violation of USOC by-laws and provisions of the Stevens Act, which governs national governing bodies like U.S. Soccer. Solo's lead attorney is Lee Charles, a merger and acquisitions attorney for the firm of Baker Botts that represents Mediacom, Commisso's cable firm.

Days before the election, the NASL filed a civil lawsuit in New York County (Manhattan) court against 14 of the 15 voting members of U.S. Soccer's board of directors and Flynn and is seeking in excess of $100 million in damages, among other relief.

Not to be forgotten, the NASL sued U.S. Soccer in U.S. District Court in September 2017, seeking an end to divisional sanctioning of pro leagues. A decision on the NASL's appeal of its suit for injunctive relief is pending.

All this doesn't even get the issues raised in the election:

Yes, Cordeiro has lots of work ahead of him.