MLS 2018: Seattle's immediate focus is getting through preseason healthy and CCL 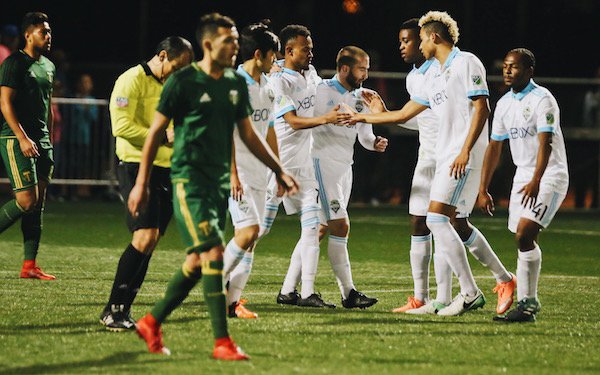 Seattle Sounders head coach Brian Schmetzer isn’t so much concerned about the start of competitive play as he is about the relatively short interval that preceded it.

For the second straight year, Seattle and Toronto FC reached the MLS Cup final last December, but unlike the 2017 season, this year both teams get underway early with quarterfinal play in the Concacaf Champions play. Schmetzer and the coaching staff have ramped up the workload for themselves and the players in preseason.

“We’re pushing the guys out to 90 minutes,” said Schmezter to reporters this week. “This whole preseason we’ve been trying to get two groups out to 90 minutes fit, because we’ve going to have a lot of games at the beginning of the year. That’s still what we’re trying to accomplish.”

When the Sounders play the first leg of their round-of-16 series in the Concacaf Champions League against Salvadoran club Santa Tecla next Thursday, they will have been in camp for about a month. Their offseason break was just 44 days (Dec. 9 MLS Cup final to the start of preseason Jan. 22.)

“We’ll certainly take into consideration if guys are tight,” said Schmetzer, who split his squad in half Thursday for preseason games against USL clubs Reno 1868 (behind closed doors) and Sacramento Republic. “It’s been a long preseason or a short offseason, whichever way you want to look at that.”

What Schmetzer and the Seattle organization are looking at is a third straight appearance in the MLS Cup final, a feat attained by only two teams in league history. But in the short term Seattle is focused on getting through preseason healthy as well as the CCL and a possible quarterfinal matchup against Chivas Guadalajara.

Captain Osvaldo Alonso is being nursed through preseason to properly recover from a quadriceps injury that forced him to miss the championship game.

Seattle is doing as much research as it can for the first leg in Santa Tecla, just west of San Salvador. FC Dallas played an exhibition against Santa Tecla last week and the Seattle staff has obtained information from Real Salt Lake, which played the Salvadoran team in the CCL group stage three years ago.

“We watched Santa Tecla on film and we saw their game against Dallas," said Schmetzer, "but at the end of the day, we don’t know them well enough to really dig deep and dive into all of it, the tactical stuff. We’re going to try to do what we do very well, and then see if we can get results.

“That’s the beauty of the Champions League. It’s an exciting time and we’re looking forward to it.”