VAR, a squiggly line and the search for the impossible

VAR has hit England, and controversy has followed.

The video assistant referee system isn't being used in the Premier League but it was introduced this winter in the FA Cup.

VAR came under the microscope when a Juan Mata goal was disallowed for offside during Manchester United's 2-0 win over Huddersfield Town in the round of 16. The decision did not decide the game -- Romelu Lukaku scored twice for United -- but it generated enormous commentary.

The first issue is the spectacle itself of a goal celebration being cut short by VAR. On this point, there was agreement from both sides.

"I did what I had to do which was to score and celebrated," Mata said. "Then after I saw the referee speaking to someone and you look silly when the goal is denied."

"Yes, the decision went in our favor," he said, "but this VAR for me kills the emotion of the game."

The problem more generally wasn't that the goal was disallowed for offside. The decision by referee Kevin Friend was correct.

The problem was that the image BT Sport was provided by Hawk-Eye and containing a squiggly line appeared to show Mata was onside when Ashley Young's centering pass was hit. 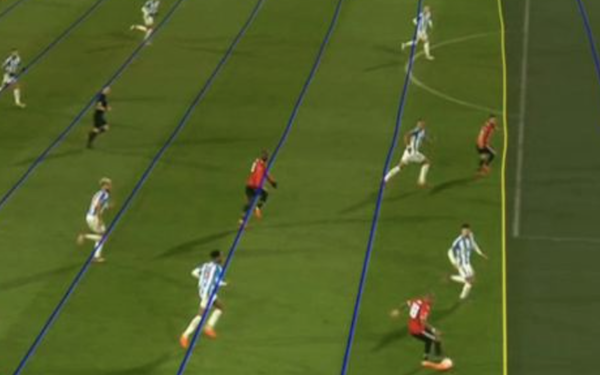 Hawk-Eye, which provides VAR technology to the FA and video to other sports, issued an apology that a "technical error led to an incorrect graphic being provided. To confirm, the VAR saw the correct image with the correct lines to make the decision. This was a case of the wrong image being provided to the broadcaster and we apologize.”

The decision did not affect the outcome of the game, but Manchester United manager Jose Mourinho could not resist the chance to weigh it.

"I'm familiar with what VAR is bringing that's good and bad," he said. "I think it's an experimental period. They have to get rid of the bad and make it perfect."

The problem is no one has ever suggested that VAR will be perfect.

VAR went relatively smoothly in MLS, which spent several years working on the project before its introduction in August 2017. But its use for league matches has been much more controversial in countries like Germany and Italy, where soccer is much more popular and every incident is scrutinized closely.

In a recent study of 804 competitive games in which VAR was used, the accuracy of decisions in the four reviewable categories went up from 93 percent to  98.9 percent. In only one in 20 matches was a clear and obvious mistake -- the standard for overturning a match-changing incident -- not detected since the introduction of VAR.

IFAB, soccer's rule-making body, is expected to approve the VAR system for the 2018 World Cup at its annual meeting of representatives from FIFA and the four British associations on March 2.

The test at the World Cup won't just be for the VAR crews to get calls right, but for those operating the world television feed to be provided the correct images upon which decisions are made.

What the World Cup can't afford is an errant squiggly line serving as fake news on a game-changing decision.

international, referees
7 comments about "VAR, a squiggly line and the search for the impossible".
Read more comments >
Next story loading