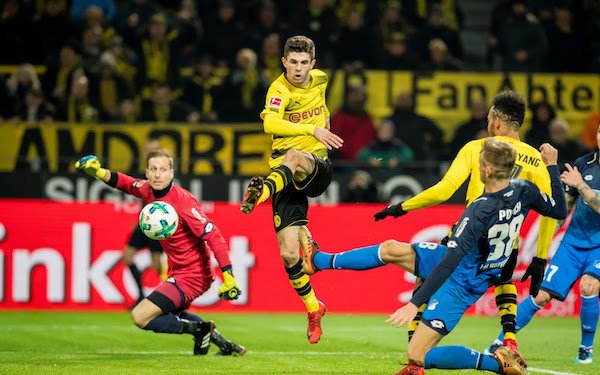 Last year at this time, Borussia Dortmund was the toast of Europe, its exciting young team on the verge of advancing to the quarterfinals of the Champions League.

This season, it has been a struggle for Borussia Dortmund. It was relegated to the Europa League after finishing third in its Champions League group, and it needed a late goal from Marcel Schmelzer to put away Italian club Atalanta, advancing, 4-3, on aggregate after a 1-1 tie in Bergamo.

Once again, Christian Pulisic struggled to have an impact on the game, exiting Thursday in the 59th minute. The 19-year-old American has not yet played an entire game in his seven appearances in 2018.

A couple of factors are at play for the more subdued performances from Pulisic in the BVB attack:

-- Pulisic no longer has Ousmane Dembele and Pierre-Emerick Aubameyang alongside him up front. Dembele was sold to Barcelona shortly after the Bundesliga season started. Aubameyang moved to Arsenal at the end of January as the winter transfer window closed.

-- Under new coach Peter Stoeger, Dortmund has taken a more defensive posture after a fall campaign marked by problems in the back that cost first-year Dutch coach Peter Bosz his job. Whatever Pulisic's struggles have been, Dortmund is getting results. It is unbeaten in all eight games since the winter break and it is in second place in the Bundesliga.

Pulisic carried Dortmund for the early part of the 2017-18 season. His average rating was 2.6 for his first 10 starts for Dortmund, putting him among the leaders in kicker's "Topspieler" rankings, but it's dropped to 4.1 for the last nine games.

"[My form is] not the best it's been but I'm working hard, trying to help the team everywhere I can," Pulisic told ESPN after the 1-0 win at Borussia Moenchengladbach on Sunday when he came on as a late sub. "But I just have to stay positive, keep going and things will turn around. There's no time for a break right now, so I'm just gonna keep going."

Pulisic's struggles come as talk of a possible summer transfer heats up. Liverpool has always been considered the favorite -- Reds manager Juergen Klopp was the Dortmund coach when Pulisic signed in 2015 -- but Manchester United, Chelsea and Bayern Munich are reported to have entered the race.

That all makes for good reading, like rankings placing Pulisic as high as No. 2 on the Gazzetta dello Sport "Top 98" list of players born in 1998 or later or No. 4 on the CIES Football Observatory's rankings of under-20 prospects in Europe, but all that matters for Pulisic and Dortmund right now is the chase for Bundesliga points and qualification for next season's Champions League.

Dortmund is second, behind runaway leader Bayern Munich, but only three points separate it from Ruhr Valley neighbor Schalke 04 in sixth place. The top four German teams will automatically qualify for the group stage of the Champions League, beginning with the 2018-19 season.

The good news for Dortmund is that if Stoeger wants to give Pulisic a rest, he's got other players ready to go. German stars Marco Reus, Mario Goetze and Andre Schuerrle all started together for the first time ever at club level for the Gladbach game. All have been at Dortmund for the last year and a half, but injuries and health issues prevented them from playing together until now.