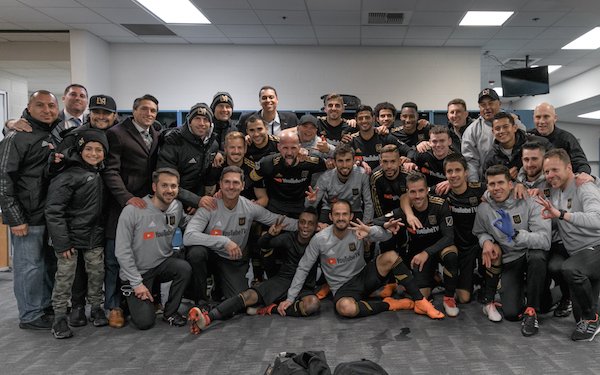 With a roster still so small it couldn't suit up 18 players after Walker Zimmerman was a late scratch, expansion Los Angeles FC went into Seattle and stunned the Sounders, 1-0, to win its first ever MLS game.

"We only get one chance for it and you got to show what you’re all about," said LAFC coach Bob Bradley, who coached his first MLS game in more than a decade. "I don’t think we showed football-wise what we are capable of but that’s only going to get better. I’m very confident as we build this team that we’re going to see some real football."

The lone goal came early in the game when young Canadian Mark-Anthony Kaye played a ball to Mexican star Carlos Vela, who was able to lay it off for 19-year-old Uruguayan Diego Rossi to score. LAFC handed the Sounders just their second loss at home in 30 matches (regular season and playoffs) since Brian Schmetzer was named head coach in July 2016.

Here's how Bradley assessed some of the key LAFC performers ...

Diego Rossi. “Diego is a talent, man. When you play at Penarol, you also get hardened. It’s not an easy club to play for. He grew up there playing with guys like [Walter] Gargano and Maxi Rodriguez and you learn not only how to play but how to carry yourself and how to fight. Diego scores a great goal and until we took him out late, he’s also working very hard. You’re going to see a lot of good things from Diego.”

Carlos Vela. “Carlos was so excited for today and you know he is a special attacking player, but look at all the other things he did today. He’s chasing back, he’s holding the ball under pressure, he’s organizing guys around them so the leadership that Carlos shows and that Laurent Ciman shows with a young team, those players, Benny Feilhaber, is really important. Carlos was great today.”

Laurent Ciman. “Laurent is a warrior. He starts preseason and obviously is excited then I think he kicks the ground in the 45 minutes in one of the friendlies and his knee just flares up a little bit. But when we got to the end of last week, it was easy to see that in his mind, he was playing. So then you size everything up but he was in training every day this week. He was very energetic. He was positive with guys and takes real pride in leadership.”