A video review at the World Cup that makes good sense

If you saw what happened with Christoph Kramer  in the last World Cup final, you'll agree this is a good idea -- FIFA using video to help doctors assess head injuries at the 2018 World Cup. 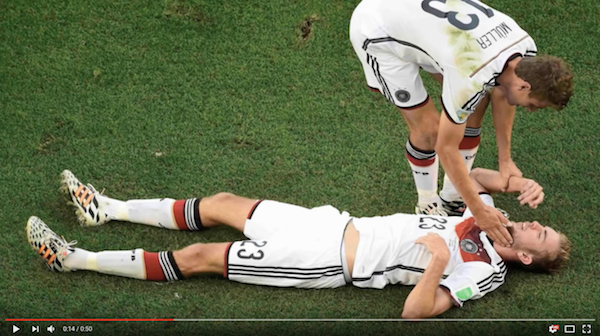 Kramer suffered a severe blow to the head in the 17th minute of Germany's 1-0 win over Argentina in 2014 World Cup final. He was inspected by two members of his team's medical staff -- and allowed to continue playing. Referee Nicola Rizzoli said that shortly after the collision Kramer asked him, "'Ref, is this the final?' I thought he was making a joke. He repeated the question and said, 'I need to know if this is really the final.'"

Kramer played for 15 more minutes before he was replaced by Andre Schuerrle.

Anybody watching the game on television saw the replays of the collision and would surely have been puzzled, if not appalled, that the glassy-eyed Kramer was allowed to continue to play.

Kramer was fortunate that he did not receive another blow to the head, which could have led to what is known as second-impact syndrome, which can have dire consequences, including death.

How could the team doctor have let have let him continue?

Even a properly administered concussion protocol exam may not detect a concussion. But it's difficult to believe that had the German team doctor seen replays of the incident, he would have allowed Kramer to continue.

FIFA has announced that at the 2018 World Cup, it will allow second team doctor to immediately review video in order to chime in on the return-to-play decision.

“To help the doctor we have now introduced a system whereby an assistant of the doctor or a second doctor will sit in front of a television screen and can help the doctor in taking his decision,” FIFA medical committee chairman Michel D’Hooghe said, “because he can review very clearly, very concretely what happened on the field, what the doctor sitting on the bench perhaps could not see. This is a supplementary help for the doctor to make his diagnosis and to say if (the player) can go on. This is the first time that we will try it. I am confident that it will certainly be a help for the medical care of our players.”

Soccer America columnist Paul Gardner wrote in a January 2017 column, in which he addressed the Kramer and a similar return-to-play incident with Manchester City's Vincent Kompany: "Surely, no one who saw the collision needed to consult a protocol, or ask some simplistic questions ('What venue are we at today?' … 'Which half is it now?' are two of the recommendations) to know that Kompany needed to come off the field."

There were other incidents at the 2014 World Cup, including when Uruguay's Álvaro Pereira was allowed to return to action after it looked like he was knocked unconscious. "I felt like the lights went out," he said.

The Journal of the American Medical Association reported 61 players had at least one head collision in the 64 games at the 2014 World Cup and in 81 total collisions only 12 times were the players given a proper examiniation.

FIFA is planning on allowing for a three-minute break to assess a head injury at the 2018 World Cup. A better plan would be to permit a substitution for a player being assessed that does not count against the three substitution limit, and allow reentry if the player is cleared after a thorough, unrushed diagnosis. Video replay for medical staff is at least a sign that FIFA has some concern for players' brains.

referees
3 comments about "A video review at the World Cup that makes good sense".
Read more comments >
Next story loading