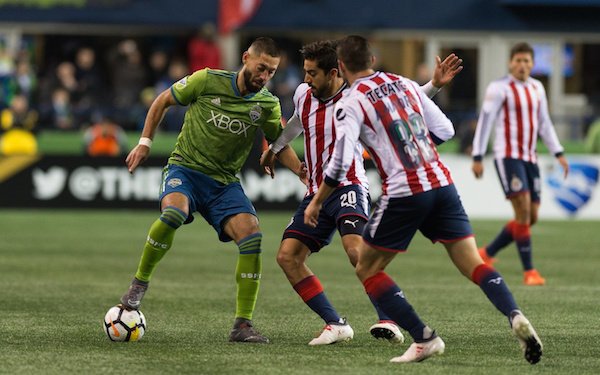 Now for the hard part. The New York Red Bulls, Toronto FC and Seattle Sounders must complete the job.

History isn't on their side.

MLS teams have won only four of 19 CCL quarterfinal series against teams other than MLS opponents, and only two MLS teams -- Seattle in 2013 and Montreal in 2015 -- have beaten Mexican teams in 14 meetings. (MLS teams are winless in six series against Liga MX teams in the semifinals and final.)

In 2014, MLS teams were in similar shape. The LA Galaxy and Sporting Kansas City won their first legs and the San Jose Earthquakes tied. None advanced against Mexican opposition.

Within nine minutes, the Galaxy was two down at Tijuana in the second leg and never recovered. Sporting KC was blown out at Cruz Azul, 5-1. Only the Quakes came close, tying Toluca, 1-1, in their second leg and taking Los Diablos Rojos to six rounds in the shootout.

This year's three MLS quarterfinalists have a much better chance than the trio that had exited in 2014, not least because they are much stronger teams. TAM wasn't introduced to MLS until after the 2013-14 CCL season.

In NY Red Bulls' favor ... They accomplished what no MLS team has ever done, and that's win in Mexico in the knockout stage. They not only beat Tijuana but got out of the Estadio Caliente with a 2-0 win.

Red Bulls coach Jesse Marsch said Monday that new German signing Marc Rzatkowski, who left midway through the first half of the first leg, is ready to go for the second leg. Marsch was able to start Saturday's MLS opener against Portland with a completely different starting lineup from the Tijuana game except for Luis Robles in goal and Sean Davis in midfield and they still won, 4-0.

Working against them: Granted, there were exceptional circumstances in Tijuana. Rubles stood on his head to the tune of 13 saves. There is no way the Red Bulls can depend upon him to repeat that performance Tuesday at Red Bull Arena. The other concern: Davis, who had a strong game in Tijuana, is suspended.

In Toronto FC's favor ... The Reds are arguably the best team in MLS history, winners of MLS Cup and the Supporters' Shield a year ago, and they were excellent in the second half at BMO Field, showing they can put Tigres under pressure

TFC was off last weekend and it has added to the deepest team in MLS history with Dutch international Gregory van der Wiel, Brazilian Auro Jr. and Spaniard Ager Aketxe.

Working against them: The Reds are facing the best team in Mexico in Tigres, winner of the Concacaf Champions League in 2015 and 2016 and Mexico's 2016 and 2017 Torneo Apertura.

Tigres is dominant at the Estadio Universitario de Nuevo Leon -- nicknamed "El Volcan" ("the Volcano") -- going unbeaten in their last 16 Liga MX and CCL games, dating back to last August. It will carry an away goal into the game and have Andre-Pierre Gignac available. The French star, who has scored 75 goals in three seasons with Tigres, was on the bench for the start of the first leg.

In Seattle's favor ... The Sounders not only won their first leg, but they shut out Guadalajara, 1-0, impressing Chivas coach Matias Almeyda with their organization and ability to hold the ball. If they can repeat that, they have a shot of advancing.

The Sounders were off this weekend and will be healthier for Wednesday's second leg at the Estadio Jalisco that they were at home last week. Kelvin Leerdam, who has yet to play this season, was training this weekend in Tukwila, and Magnus Wolff Eikrem, who missed the Chivas game, was also back.

Chivas -- 15th in the 18-team Liga MX -- is the weakest of the four Mexican teams in the quarterfinals -- Club America, the fourth team, travels to Panama's Tauro with a 4-0 lead -- and has struggled at home, where it is winless in Liga MX since last October.

Working against them: A one-goal advantage isn't a lot -- and the Sounders will rue the chances they missed at home if they don't win the series.

Chivas was coming off its Super Clasico against America when it traveled to Seattle. It will be ready to go on Wednesday.