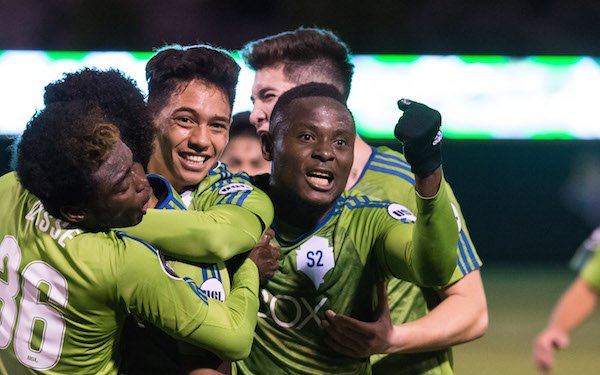 The Sounders FC 2 -- better known as S2 -- started seven teenagers and brought two more off the bench, including 15-year-old Ray Serrano, in its 2-1 win over Timbers 2 before 6,049 fans in the 2018 USL opener played at S2's new home, Chaney Stadium in Tacoma.

The S2 goalscorers were 19-year-old Cameroonian Felix Chenkam, who joined S2 last season from Rainbow Bamenda FC, and 20-year-old Nick Hinds, who moved to the Sounders' academy from Florida in 2015 and spent the last two years at the University of Akron.

All but Teves and Martin are pros. Amateur academy players can play for pro USL teams before they head off to college. Rogers, the S2 captain, and Morris were called up to the U.S. U-20 national team for its trip to Spain. Serrano is a regular on the U.S. U-17 national team.

The Sounders have aggressively pushed academy players and young foreigners into their USL second team.

Martinique international Jordy Delem and 20-year-old Cameroonian Nouhou moved up to the Sounders' first team in 2017 and were contributors on their run to MLS Cup 2017.