The assistant referees were having a lively debate at halftime.

I was the ref of a Division 3 women’s college game. The white team had dominated the first half and was up 3-0 as we approached halftime. In the last minute of the half, a white shot was going into the goal until a maroon defender on the goal line raised her arm and batted the ball down, preventing a goal. I awarded the penalty kick and sent off the defender for denial of a goal.

Regarding the red card, AR1 (the assistant referee by the benches) said, “Randy, you just killed the game.”

AR2 countered, “What was he supposed to do?”

They had a passionate debate for a couple of minutes with AR1 stating that he was concerned that white was so much better than maroon 11 vs. 11 and now they would be up a player so the score could approach the double digits in the second half.

I had the final word and said, “We are here to enforce the rules and protect the players. We do not pick and choose which rules we enforce and which ones we do not for the entertainment of the spectators.”

The white coach put in her subs for the second half and maroon played some of their subs too. White continued to dominate possession but could not score in the second half. In the last minute of the game, a maroon attacker received the ball at midfield and went to goal on a breakaway. Around 35 yards from goal, a white defender was on her heels but was always behind her. 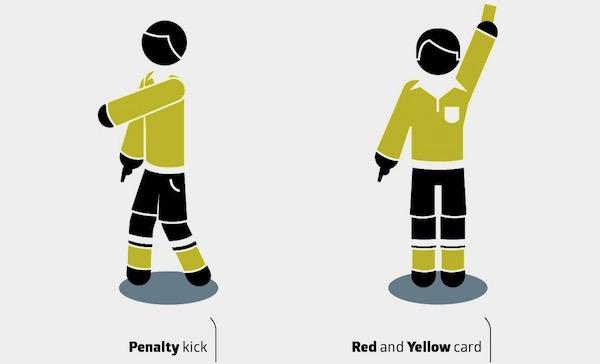 Perhaps one reason that the defender did not foul was because she knew that I would have no hesitation in showing her a red card, as I did to the defender in the first half.

Enforcing all the rules is obviously important because when you do not enforce them, it becomes a slippery slope as the players quickly pick up on this. Take a boys U-17 game in which I was AR1. The ref correctly awarded a penalty kick at the start of the game when a defender deliberately handled the ball just inside the penalty area.

The ref’s game control suffered as he needed to continue to be decisive and was not. Midway through the first half, a purple attacker was dribbling on a breakaway when he was deliberately held from behind by a white defender just outside the penalty area with only the keeper between the attacker and the goal. The ref awarded a free kick and took nearly a minute to give out the card.

This was in the other half of the field from me and during this time, the white coach said to a sub, “If Johnny receives a red card, we will put you in on defense for Mark.”

Instead of a red card for DOGSO, the ref incorrectly gave the white defender a caution for unsporting behavior.

I cannot recall ever being part of a game with three DOGSO incidents and a reason for so many was because the players knew the ref was hesitant to show his red card. When I said something to him, he told me that “You might be the ref on other games but I’m the ref for this game.”