Making a case for soccer nonsense

Trapped in my New York apartment. An exaggeration. But it is snowing quite hard. And this is the third week of March.

The world is out of kilter. And so am I. I shall seek refuge, as ever, in humor: “A little nonsense now and then is relished by the wisest men.” Words that I thought were uttered by essayist Joseph Addison. But I find my younger friends say they belong to Roald Dahl’s character, Willy Wonka. They are wrong of course, but as no one reads Addison these days (and why would they?), Wonka will probably win that argument.

Whatever, I’ll dive quickly into soccer nonsense. Of which there is a great deal. Much of it is spouted by the television pundits whose ineptitude knows no bounds. It can be relied upon to turn a thrilling game into a bore, a mediocre game into a yawner, and to make a lousy game even lousier.

I deal with that annoyance by pressing the mute button and calling up the captions. It is from those captions that the following nonsense comes. I don’t know how those captions come into being -- some sort of computer voice-recognition, is what I imagine. I suppose that would be an algorithm, no?

That is how I learned, a couple of seasons back that, that an English Premier League team had “played livable on opening day.” What could that mean? Playing livably is probably a good thing, I thought, but still odd. It took a while before I cottoned on -- they’d played Liverpool .

A lot of the algorithm’s errors (right or wrong, I’m blaming or praising an algorithm for the Alice in Wonderland stuff that follows) arise from mis-hearing words. Given the array of woeful British accents that are so frequent, my sympathies to the algorithm.

The names of stadiums, for instance. Tottenham’s White Hart Lane has come up as White Hart Lake, and as the formidable White Hot Lane. West Ham United’s old stadium -- the Boleyn Ground -- became the Bowling Ground, reason enough, methinks, for them to move to the spanking new London Stadium. San Jose, evidently miffed at having their Buck Shaw Stadium captioned as Buckshot, rebuffed the insult by building a new one.

Players of course have suffered most. Barcelona’s Rakitic would not recognize himself as Rocket Pitch. Jozy Altidore has been Out the Door. Chris Tierney may not like becoming Chris Tyrrany, same probably goes for Ricardo Clarke (Ricardo Clock), Jon Bush (Jon Push). And how about Jason Kreis getting on screen as Jason Christ?

Not at all acceptable, I imagine, would be Atletico Madrid’s Antoine Griezmann popping up as Grease Man.

Slightly, but only slightly, less bizarre is this episode from a Galaxy-Kansas City game in 2016: “Espinoza will switch it across near side -- Dalai Lama will find Nagamura.” Not a guest appearance by the Dalai Lama, who turns out to have been Kansas City’s Abdul Salaam.

The algorithm had an earlier run in with a Kansas City player, in 2015. Maybe it was getting pissed off with people laughing at its anomalies, for up came this almost sarcastic display of phonetic clarity: KRIZ TEA HEN NAME EDGE. Just say it phonetically and you come up, more or less, with Krisztian Nemeth.

Coaches seem to have escaped relatively unscathed from the algorithm’s clutch. I can find but one example in my scribblings -- Tottenham’s Mauricio Pochettino turning up as Put to Tino. There’s even a TV pundit who’s been misnamed. None other than Alexi Lalas, presented as Alexei Lawless. Worth a laugh Alexi, no?

The game itself presents plenty of opportunities for algorithmic nonsense. As the teams come back for the second half, the commentator is trying to spot substitutes and says -- apparently: “We’ll see if either coach has an altercation in mind.” We have players picking up an energy (sounds preferable to an injury), the referee becomes a refusery (nice one!), he gives an incorrect (rather than indirect) free kick, has even awarded a personality kick.

Plastic turf? The word artificial got itself transmogrified into “this bouncing agricultural surface,” but hold your criticism, for that would surely account for the wayward shot that was hit “over the barn.”

An algorithm, surely, cannot come up with a spoonerism, so I suspect a human must be responsible for talking about “goals scored from pet ceases.”

I said “a little nonsense,” so that’s enough. It’s still snowing out there, but softly now. Every limb, every branch, every twig of the hardy street trees is white -- “the trees in winter’s silver frond.” The words are Pushkin’s not mine. The view is quite beautiful, but it disappears quickly, like a fairy story.

I’ll leave you with a fairy tale ending. Another quick change -- the caption that read “substitutes available for the homicide.” Read home side. So we all lived happily ever after. 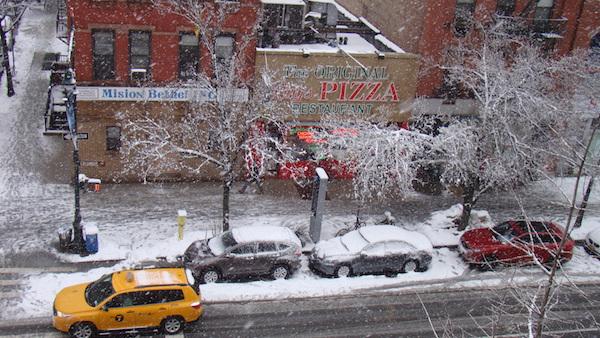 off the post, television
4 comments about "Making a case for soccer nonsense".
Read more comments >
Next story loading