Mourinho: 'I won't change.' Nor, it seems, will goalkeepers

Two things: 1) trying not to be irritated by Jose Mourinho, and 2) another goalkeeper incident.

1.Here is Mourinho at a recent press conference, looking relaxed, actually smiling, almost cracking a joke -- well, cracking an almost-joke is more like it. Soon he was lecturing the press, in effect telling them -- in quite a polite way -- that they’re getting everything wrong. 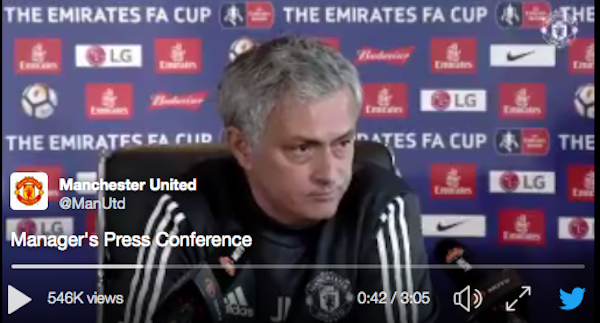 United had just been knocked out of the Champions League, losing 2-1, at Old Trafford to Spain’s Sevilla. An utterly lackluster performance by Mourinho's team. Both at the individual level, where the players seemed uninspired, and at the tactical (i.e. coaching) level, where the game surely called for an attacking, goalscoring United performance, but got instead caution, even apathy, and ended in a thoroughly deserved and plainly humiliating defeat.

Mourinho had all the stats ready -- he rolled out ManU’s not-too-great recent performances in the UCL, then went on to praise Sevilla as a team that has brilliant scouting, that invests every Euro wisely. Mourinho had his facts written down, he was well-prepared for this ... but even so he began to digress. He felt obliged to mention that he and the ManU owners are on exactly the same page, “we agree in everything, we agree on the investments that we are going to make ... So, life is good.”

Soon he was talking of his decision to come to United, pointing out that he came because of the challenge: “I could be in another country, in the kind of league where you win even before the league starts. I’m not. I’m here. And I’m going to be here.”

What had started as a controlled and impressive performance from Mourinho ended in confusion. Except on one point: Mourinho’s insistence that he would not change his mentality. We ought to know by now what that mentality is. Briefly, that winning is all that matters. The hell with style and entertaining soccer, the big W dominates everything.

In another interview, back in 2015, he told us flatly that coaches who emphasize possession and beautiful soccer are stupid. He was then coaching Chelsea, he had just won the Premier League, but was already facing critics who called his team boring.

Mourinho was soon to lose his job at Chelsea. He is back, at Man United. With the same mentality. Early in March ManU beat Liverpool 2-1. Liverpool had 68% of the possession, had 14 shots to ManU’s 5. He shrugged off the stats: “If people don't think we deserved it, I don't care.”

The “don’t care” attitude is what infuriates his critics. Plus, of course, the fact that he is right. Playing “pretty” soccer and not winning (Mourinho is clearly jabbing at Arsene Wenger) will not get you anywhere. Winning is the most important thing.

People who argue otherwise are wasting their breath. The real argument should be over whether winning soccer has to be cautious, defensive and . .. . dull. Mourinho’s attitude suggests he believes that to be the truth. Barcelona, Real Madrid, the classic Brazil - they all suggest otherwise. There is plenty of discussion left in that argument.

2. In the 90th minute of the recent Atlanta-Vancouver game, Atlanta’s Argentine defender Franco Escobar jumped to head the ball out of his penalty area. Goalkeeper Brad Guzan came racing forward to punch the ball away. They met about 4 yards inside the penalty area -- Escobar had his back to Guzan, could not see him. Guzan leapt into him, punched the ball away while at the same time making violent contact with his right elbow on Escobar’s left temple. 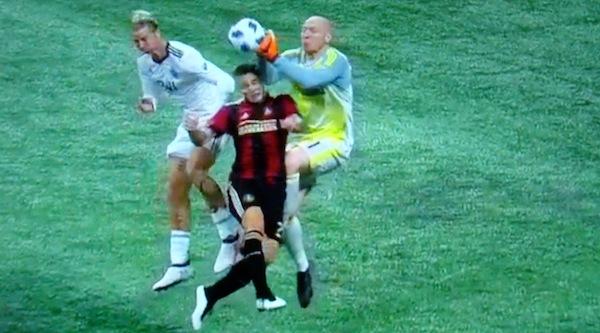 The game was held up for nearly 4 minutes while Escobar received attention. He left on a stretcher, the game ended shortly after that. Anyone who saw the impact of Guzan’s elbow on Escobar’s head (the replays tell it all) could hardly doubt that Escobar would be concussed. So it has proved -- though it took Atlanta United four days to make the announcement.

So we have yet another example of reckless goalkeeper play resulting in serious injury. This time, it is one of the goalkeeper’s own players who gets injured. There are those who will say this clash was nobody’s fault, that it was simply an unfortunate “part of the game.”

But one does not have to blame anyone to find this incident unacceptable. No one will be saying that Guzan injured Escobar intentionally. Of course not. Guzan did what goalkeepers are expected to do -- he “cleaned out” whoever happened to be in his way, and he got to the ball.

Of course this is reckless play ... at the least. It should make no difference that the injured player is a teammate of the goalkeeper. The collision is inevitable, and the chances of a head injury, of a concussion, are always high. In this incident, Guzan also jumped with his left knee raised, making contact with Escobar’s lower back area, where the unprotected kidneys lurk.

It goes without saying, because this is how referees view these clashes, that no foul was called on Guzan.

How can the people in charge of the world’s most widely played sport be so complacent, so blind, so unconcerned with the safety of its players, that they are unwilling to take the comparatively easy steps necessary to put an end to these violent clashes?

Equally disturbing is that, yet again, nothing has been heard from the referees or the goalkeepers -- the people who are in the front line when these “unfortunate” injuries happen.

mls
5 comments about "Mourinho: 'I won't change.' Nor, it seems, will goalkeepers".
Read more comments >
Next story loading