United 2026 bid: The case for USA, Canada and Mexico

FIFA published the bid books in which United 2026 (USA, Canada and Mexico) and Morocco laid out their cases to host the 2026 World Cup.

United 2026 proposes to play the, 48-team, 80-game tournament (16 more teams and 16 more games than in the current format) at 16 venues across the three North American countries.

That means the 60 U.S. matches would be played at only 10 of 17 cities in the bid. It proposes a "west to east" flow as the tournament progresses, ending with the final at MetLife Stadium in East Rutherford, New Jersey, noting, for those counting, the airport connections in the New York/New Jersey area to more than 181 cities and its more than 100,000 high quality beds.

United 2026 proposes that Mercedes-Benz Stadium in Atlanta and AT&T Stadium in Arlington, Texas, host the semifinals. But it gives FIFA -- which will have the final say on venues and schedule -- multiple options, listing the possibilities of the 23 venues for the matches they might host: 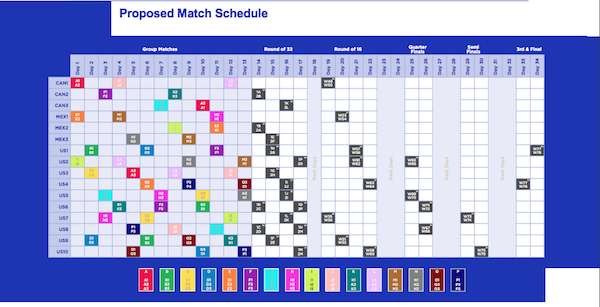 The tournament, which would be played over a span of 34 days with seven days off, would open with games on the first day in the USA, Canada and Mexico.

With all stadiums having of a capacity of 68,000 or more, United 2026 anticipates all 80 games being sellouts with 5.8 million in ticket sales for revenues of more than $2.1 billion.