The USA won its first game since failing to qualify for the 2018 World Cup. A Bobby Wood penalty kick decided the 1-0 win over Paraguay in a game in which three Americans made their national team debuts and several youngsters accounted well for themselves against a rough foe.

7 Matt Miazga/22 (Vitesse/NED) 5/1
Helped keep Alimiron and big man Federico Santander at bay. Passed well out of the back.

6 Cameron Carter-Vickers/20 (Ipswich Town/ENG) 2/0
Not as busy as his central D partner Miazga but played close to flawless.

6 Jorge Villafana/28 (Santos Laguna/MEX) 16/0
Left-back sparked several attacks coming out of the back and sent in crosses.

7 Wil Trapp/25 (Columbus Crew) 4/0
The captain played like a sweeper in front of backline, interfered with several attacks, and passed well when he won the ball. Blocked Alimiron's 68th-minute shot.

6 Marky Delgado/22 (Toronto FC) 1/0
Delivered the through pass to Adams that led to penalty kick. 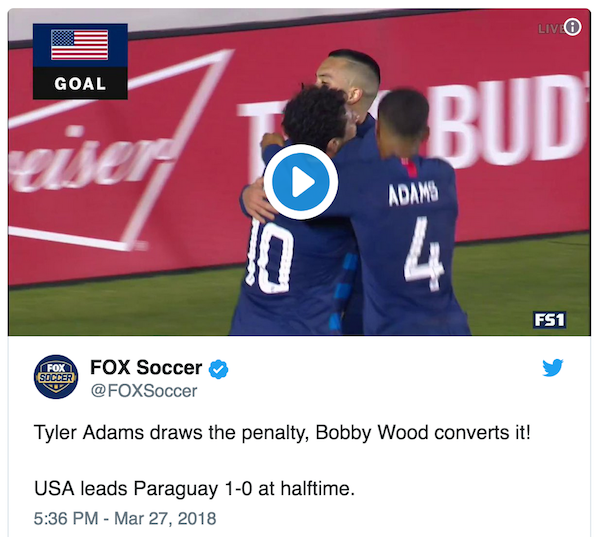 6 Kenny Saief/24 (Anderlecht/BEL) 2/0
Had a presence on the left-wing but inconsistent with passes; frequent giveaways in the first half. Squandered the best first-half chance while getting in Wood's way. But found his groove in the second half and pulled off some nifty moves that frustrated Paraguayans before being subbed in 67th minute.

NR Andrija Novakovich/21 (Telstar/NED) 1/0
Failed to convert a stoppage-time one-on-one after entering in the 77th minute.

NR Tim Weah/18 (Paris Saint-Germain/FRA) 1/0
Set up the Novakovich chance. Some promising moves in his cameo made one want to see more.