Julie Foudy on the new U.S. Soccer, inspiration from Billie Jean King, and getting girls to raise their hands

Julie Foudy, at age 20, started in midfield as the USA won the inaugural Women's World Cup in 1991. In 1998, she received the FIFA Fair Play Award for campaigning against child labor in the sports equipment industry. At age 29, she became the youngest president of the Women's Sports Foundation. In 2002, she was the only athlete who served on the George W. Bush administration's Secretary of Education's Commission on Opportunity in Athletics, which successfully fought off an attempt to weaken Title IX. Now an ESPN commentator, reporter and host, Foudy won two World Cups and two Olympic gold medals during a 17-year national team career in which captained the USA for 13 years. 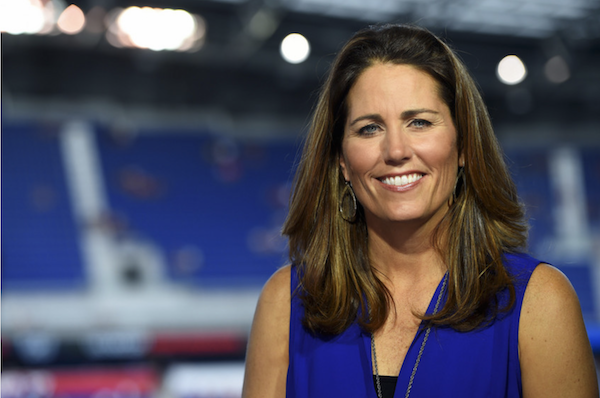 Foudy, whose two children are 9 and 11 years old, launched the Julie Foudy Sports Leadership Academy in 2006 and last year authored "Choose to Matter: Being Courageously and Fabulously YOU" a book for young women and girls that includes insight from Mia Hamm, Alex Morgan, “Good Morning America” anchor Robin Roberts, and Facebook's Sheryl Sandberg.

SOCCER AMERICA: Do you still play?

JULIE FOUDY: In the backyard with my kids. We got a net set up. Our poor neighbors have to fetch like five balls a day. Maybe this will turn out to be best thing ever -- learning to "Keep your shots down!"

You've spent most of your adult life advocating for girls and women's opportunities but you also, in a NPR interview earlier this year on the state of American soccer, addressed the issue of the insufficient inclusion of the Hispanic community ...

Here's an example. There's a very talented Hispanic player at my son's club. I asked the coach about him. He told me that the boy's mom happened to be at the park where the team trains and came up to him and in Spanish said, "My son loves soccer but I don’t know where to put him." Isn’t that interesting? Because if the mom didn’t have the courage to speak up, that kid might never have fallen into a club. How many don’t speak up, or speak to a coach, or happen to be at a park and see these kids training? 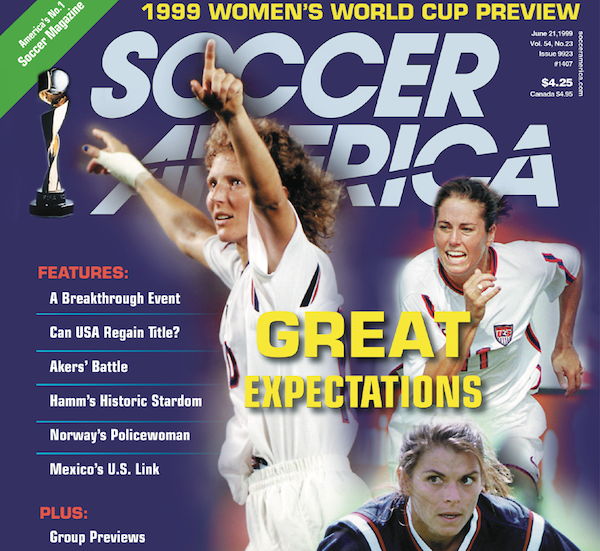 When we talk about the Hispanic issue and the pay-to-play obstacles, we're often thinking about the boys side, because it's easier to win on the girls side without reaching out to lower-income players than it is on the boys side. But the barriers are also there for the girls ...

For women, for girls especially, it's harder, especially if it's not in the culture to advocate for girls to play. It takes parents going out of their way to find a club for a daughter. ... It’s hard. They can’t get to practices. The parents are working. There’s a lot of barriers to entry that we don’t address, so you can understand why they’re falling through the cracks.

The USA would have have been the first major soccer federation in the world to have a female president had Kathy Carter not lost to Carlos Cordeiro. What are your thoughts on a woman president of U.S. Soccer?

I think it would be phenomenal. One of the biggest issues for U.S. Soccer is the lack of diversity. You have so few women in decision-making positions there. So many studies have shown that diversity in any company -- not just women, also people of different ethnicities -- helps it be more productive, efficient and they do better. It’s something that we’re very late to, and I know Carlos is focused in on that, and that’s a good thing.

So you're OK with how the election turned out?

I think the problem with Kathy is she was saddled with her connection with the ownership group and the establishment. Very similar to our politics, they wanted something new. Rightly or wrongly, she had to bear brunt of that. She was connected to Sunil Gulati. I also think Sunil, for all he did, I think he got way too much negative press. I think he did a lot more than people give him credit for. I think that will come forward later on. Sunil had his faults. He wanted his hand in everything. But I do think he did a great job of putting U.S. Soccer in a position where it has $150 million reserve in cash. It’s one of the healthiest NGBs [national governing bodies], if not the healthiest that we have. And I think a lot of that comes down to what Sunil did. 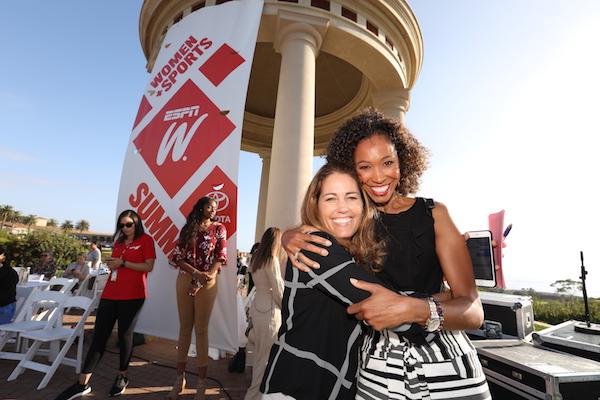 Speaking of Sunil Gulati, it seems that amid the anti-establishment sentiment he got little credit for all he did for women's soccer as a U.S. Soccer official, such as the launching the NWSL in 2013 -- after two previous pro women's leagues failed ...

I know he got a bad rap from the women. I don’t think he handled everything as well as he could have, obviously. But he has done a lot of good things.

I remember at one point Sunil coming to me and saying they were going to get it [the NWSL] up and running in six months time. And I said, Sunil, there’s no way. You of all people know, re-branding, getting ownership groups together, takes time ... I fear you’re trying to do it too fast. Maybe you wait and give yourself another year lead time. And he said, no, I think I can do this. I said, I think you’re crazy. You’re not going to be able to pull it off. And he did.

And that was driven largely by Sunil. And yes, he deserves a hell of a lot of credit for that.

The NWSL is now in its sixth season -- surviving twice as long as each of its predecessor leagues -- but profitability remains a struggle. What do you think are the keys to a viable women's pro league?

The biggest challenge has been longevity and stability, right? It was obviously a huge boost for the U.S. Soccer Federation coming in and supporting the national team players’ salaries, taking that off the cap, that chunk of salary off the owners. And the infrastructure, the league office and the staffing.

Before, back in the days of the WUSA, MLS wasn’t in the position -- it had just launched – to start thinking bigger about how to add a women’s team. They were in the weeds with the minutiae of getting their league off the ground and surviving. And that was in the critical juncture where they almost didn’t survive.

Now we have a more realistic scenario where you have teams coming in saying, We can add a women’s team. MLS is good enough shape and that will help. 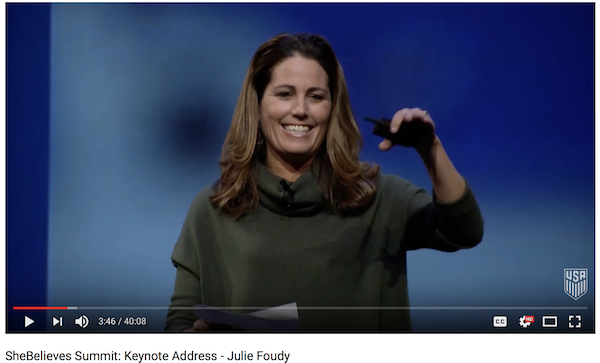 This is why I’m hopeful for the new U.S. Soccer. The really neat thing is we had a ton of great women from U.S. Soccer there running it, which was great to see. I have said in the past in my 30 years of dealing with U.S. Soccer I’ve never dealt with a woman in a decision-making position and now what we see: the head of HR is a woman. The head of their legal department, their in-house counsel, is a woman. I think we’re getting there slowly but surely and this is another indication.

Your activism dates back to your playing days. What was something that inspired you?

One of the greatest moments in my life is I got to meet Billie Jean King in my early 20s. She became a great friend and mentor by sharing her stories about tennis, how they started the women’s tennis association, and how they broke away.

She was really the one who pushed us as players. What are you doing as players? You hold the power. Be courageous enough to stand together and use that power. And that’s when we really changed things in the 1990s for soccer, which really changed the history of women’s soccer.

And that was from hearing her story. So you never know when someone hearing a woman’s story can impact and inspire change in the course of their lives, and that’s where the hope is behind what they were doing with the SheBelievesSummit. And I applaud U.S. Soccer for that.

What spurred you to launch a leadership academy for girls or write the book for girls and young women?

I was frustrated with witnessing the lack of confidence in even the women who had the most obvious reasons to be confident -- the superstar athletes or captain of your team. Yet they were unwilling to raise their hands and were really risk-averse to things. And I got frustrated by that.

Why aren’t we taking that step forward as young women?

We’re risk-averse. Some of the things that actually make us successful -- being very disciplined and hardworking, and want to check every box, make sure we’re ready -- also keep us from raising our hand.

Whereas the guy next to you is raising his hand saying, Yeah, I can do it. And he doesn’t know how, but says I’ll learn. But we wait and we wait.

I see that you also provide the narration on the audiobook of "Choose to Matter: Being Courageously and Fabulously YOU" ...

Even though it’s kind of a heavier topic of leadership, the book is done in a fun and playful way. It’s very much in my voice and I interview all these amazing women. Very interactive, they can write in it. There are exercises, things we do with the national team, team building. You never know when one little nugget or one piece of wisdom you pass on is going have an impact.

women's national team
5 comments about "Julie Foudy on the new U.S. Soccer, inspiration from Billie Jean King, and getting girls to raise their hands".
Read more comments >
Next story loading