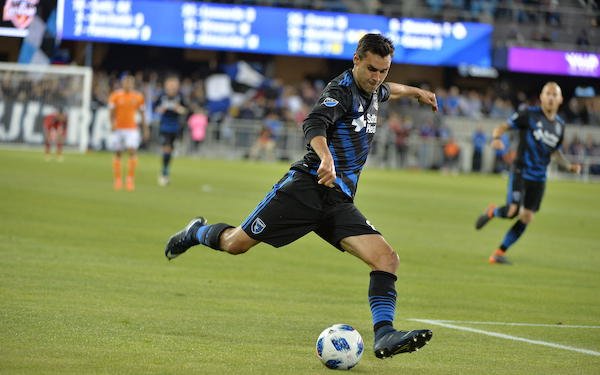 Chris Wondolowski, MLS's No. 2 all-time scorer, will have to adapt to a new role on the San Jose Earthquakes.


First-year coach Mikael Stahre has switched formations, shifting from a 4-4-2 formation, in which the Quakes were often struggling in midfield, to a 4-3-3 that left no room for Wondo up front.

Wondo came on for midfielder Fatai Alashe in the 67th minute, though, and was on the field when the Quakes got a late equalizer for a 2-2 tie at home against the Houston Dynamo.

“Of course, it’s always hard to select the lineup," said Stahre, "and in this game there were tactical reasons to play in a 4-3-3 and add one more midfielder.”

Wondolowski, 35, had played every minute of the first four games and scored one goal, the 135th of his MLS career. In his previous seven seasons, 210 of his 211 appearances have been starts. Going back to 2010, when he started 26 of 28 games, Wondo has scored 10 or more goals every season.

“It’s one of those things," he said of his new role. "It’s a part of the game. We wanted to make a tactical change and add another guy in the midfield to try to possess it. It’s something we’ve been trying to work on -- building our possession into the final third. Coach talked to me about that. It’s the role he asked me to play. Going forward, I’ll try and take that the best that I can.”

The tactical changes included second-year pro Jackson Yueill taking Wondo's spot in the lineup as an extra midfielder. Fatai Alashe also got his first start in midfield as Florian Jungwirth moved to the backline. Magnus Eriksson and Vako remained the two wingers while Danny Hoesen became the lone forward. Wondo said he liked the changes.

"Especially with our personnel, it adds a lot of lethal weapons," he said of the 4-3-3, "and I think that’s something that can showcase. But I think all across the field we have to be better. I think to a man, we all know we can play better a little bit sharper with our possession and our passing. To be honest, our energy as well.”

Against Houston, the Quakes led 1-0 at the half but conceded a bad goal in the 48th minute when young Uruguayan center back Yeferson Quintana turned the ball over 20 yards from goal. Alberth Elis fired a shot that was blocked by Anibal Godoy, and Tomas Martinezput away the rebound.

Elis set up Mauro Manotas to put the Dynamo ahead in the 63rd minute before Albanian Jahmir Hyka, who came on the field at the same time as Wondo minutes later, scored his first goal of the season in his debut appearance of 2018.

Wondolowski said coming off the bench was different but something he's done before.

“I’ve come off the bench a couple of times for the U.S. [national] team," he said, "and so I know how to prepare myself to be ready to go. Wish I could have helped us to get three points, but I was really proud of Jahmir and I thought he did a great job of coming in and scoring that goal.”