In the first structural moves since Carlos Cordeiro's election as president in February, U.S. Soccer's board of directors approved the creation of two new board-level committees and a restructured senior management.

The two new committees were both proposed by Cordeiro during his campaign:

-- Technical Development Committee will oversee soccer operations within the federation and be co-chaired by U.S. Soccer Board members Carlos Bocanegra and Angela Hucles, both former national team players.

-- Commercial Committee  will oversee U.S. Soccer's commercial activities and evaluate future plans in the area of media rights and sponsorships, areas that were the subject of intense debate during the election.

"These changes will empower the board to play a greater role in all federation activities, and reflects our ongoing commitment to improve oversight and accountability and serve all our members," said Cordeiro in a statement. "By involving board members earlier in the decision-making process, we can more effectively utilize the available expertise, build consensus and improve the effectiveness of the federation." 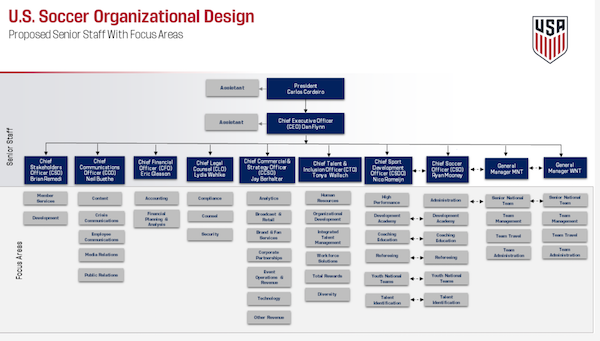 They include four on the soccer technical side: Nico Romeijn, the former head of coaching education, in the new position of Chief Sport Development Officer, overseeing all technical areas, Ryan Mooney as Chief Soccer Officer in charge of administrative needs on the technical side and two general managers (yet to be hired) in charge of the senior men's and women's national teams.

To oversee the expansion of the Membership Department will be Remedi with the title of Chief Stakeholders Officer. Tonya Wallach will hold the new title of Chief Talent and Inclusion Officer to promote equality and inclusion and create opportunities and pathways for the federation to get the most out of its staff.