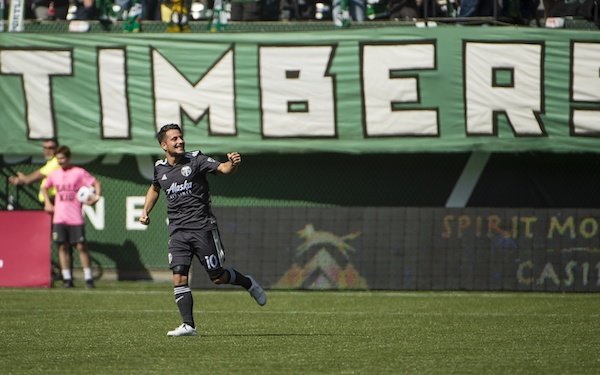 NYCFC came into Portland with the best record in MLS and a seven-game unbeaten streak to start the season but met its match in the Timbers, whose 3-0 victory was a statement win for a team that had struggled for the first month under new head coach Giovanni Savarese.

Poor defending and second-half collapses were killing the Timbers, who went winless in their first five games under Savarese. Any letdown in concentration against NYCFC would have been fatal as Patrick Vieira's team had almost 75 percent of the possession on Sunday. But the Timbers limited NYCFC to three shots on goal and recorded their first shutout of the season.

“We felt that we needed to change something for this match especially because of the way they play," said Savarese. "But also we understood that when we had the ball we had to create the things we did well in the past few games. And the guys were able to execute in a very good way."

Goals from Sebastian Blanco (team-leading fourth goal), Fanendo Adi (second in two weeks) and defender Larrys Mabiala (first career goal) gave the Timbers their second win in two games at Providence Park, which is being expanded. Savarese said a big reason for the improved results is simply being back at home.

"We’ve been progressing game after game," he said. "I’ve seen from the game at Dallas to Orlando we have been growing every match. The past match against Minnesota and now I think today, finally a complete match in which the team was very disciplined. But we are home, the crowd, our fans, are fantastic here. They are that extra energy that we need on a constant basis and it’s incredible to play at home.”

There was more shaky play in the 3-2 win over Minnesota United, but the Timbers got a complete effort against NYCFC.

“It gives us a week of work and believing that what we are doing is the right thing," said Savarese. "It’s showing the players that when they commit together to the same goal we can achieve amazing things because we have a great group and especially these victories allow you to continue to believe in the path you are on.”

The game coincided with the return to the backline of captain Liam Ridgewell, who had been benched after a 4-0 loss at the New York Red Bulls in Portland's second of five games on the road to open the season.

“Liam had a fantastic match," said Savarese of Ridgewell, whose return to the lineup was then slowed by a leg injury. "He was very good today. He brought in a lot of experience in the back and I was very pleased with his performance today as part of the entire group.”

Another reason for the improved play has been the growth of 19-year-old Paraguayan Cristhian Paredes sitting in central midfield alongside veteran Diego Chara.

“I think Cristhian has grown a lot, has matured a lot from the first match against the Galaxy," said Savarese. "We saw today he understands when to go forward, when to sit, to try to play simpler. He did a lot of very good things today and I see the progress from his part and I think he’s starting to understand more and more this league and I think so far he’s been a very important component.”

Trivia. Savarese is perfect against NYCFC. During his tenure as head coach, the New York Cosmos beat NYCFC twice in the U.S. Open Cup.