Patrick Vieira: 'I am better than I was a few years ago' 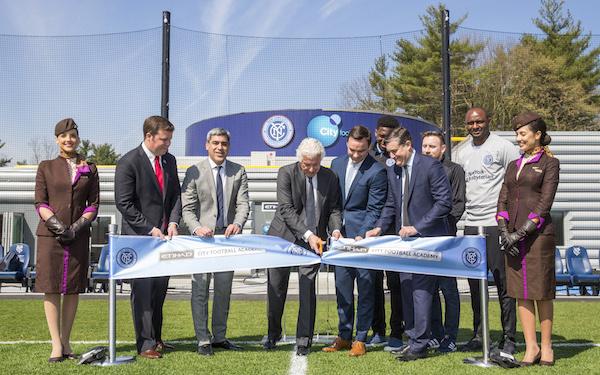 Four days after his former manager, Arsene Wenger, announced he was leaving Arsenal after 22 years, New York City FC head coach Patrick Vieira says he has not been contacted by the Gunners about Wenger's job.

The Frenchman, who had rejected offers last year from Ligue 1 clubs Rennes and St. Etienne, has been mentioned as a candidate to replace Wenger.

"It's good I think when your name is linked with big teams in Europe," Vieira said. "it shows that people are following what you're doing and you're doing a good job. I'm really pleased with that. What's important for me is to focus and concentrate on what I'm doing at the moment. My head and my mind and my energy is on how to win our next game."

NYCFC is 5-1-2 after dropping its first game of the season, a 3-0 loss at Portland, on Sunday. It finished on second place in the Eastern Conference in 2016 and 2017 after going 10-17-7 in its first season under Vieira's predecessor, Jason Kreis.

"I think our game plan today is much better than it was in the first year," said Vieira, who did not rule out returning to NYCFC in 2019. "I think having a clear idea about the way we want to play, what I want from players in each position, regarding the formation that I want to use. I am better than I was a few years ago."

mls
1 comment about "Patrick Vieira: 'I am better than I was a few years ago'".
Next story loading