Several teams, including NYCFC, took advantage of Sporting Kansas City and FC Dallas losses to move up. NYCFC took over second and expansion team Los Angeles FC, which opened its new stadium by beating Seattle, 1-0, jumped up to third.

1. ATLANTA UNITED (6-1-1), 1. Four goals in the final 20 minutes, including a pair of spectacular free kicks by Kevin Kratz, added another impressive offensive outburst to the AUFC legacy.
2. NEW YORK CITY FC (6-1-2), 2. The 400th goal in all competitions for David Villamarked a professional display against a worthy opponent. He’s already scored 68 for NYCFC, which meets NYRB in the first derby of the season on Saturday. 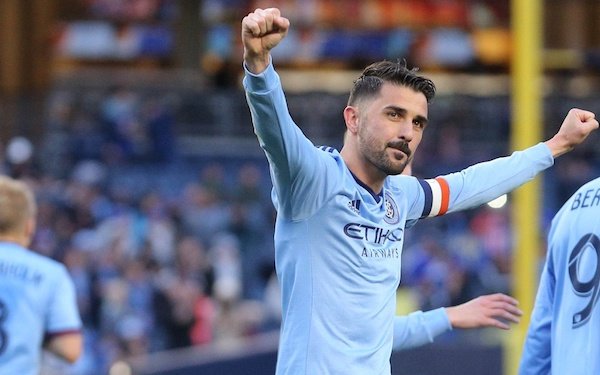 3. LOS ANGELES FC (5-2-0), 3. A fortunate goal – from a Laurent Ciman free kick -- atoned for a nervy performance in the grand opener at Banc of California Stadium. Now what can LAFC do with three home games in nine days, starting Saturday against FC Dallas?
4. ORLANDO CITY (5-2-1), 6. Another big moment by Yoshimar Yotun engineered a comeback win, the Lions’ fifth straight.  After Cristian Higuita equalized early in the second half, Yotun forced a turnover and he raced into the box for a return pass from Justin Meram. A foul sent him to the penalty spot and he blasted his kick home.
5. SPORTING KC (5-2-2), 2. SKC was shut out for the first time since the season opener and needed six saves from Tim Melia as its seven-game unbeaten streak ended. A VAR offside review went against SKC on the Revs’ goal that was apparently set up by a clearance attempt that came off the foot of Roger Espinoza.
---------------------------------------------------------
6. NEW ENGLAND (4-2-2), 7. The Revs are looking like genuine contenders in the Eastern Conference after another all-around display. Teal Bunbury delivered the goal and they put enough pressure on SKC to have merited a second.
7. NY RED BULLS (4-3-0), 8. Rather than settle for a point after squandering a two-goal lead at StubHub Center, NYRB got a late winner by Kaku from the penalty spot. Two goals produced by Bradley Wright-Phillips crosses had built the lead.
8. FC DALLAS (3-1-3), 4. This may not be the FCD seen in the past two seasons but despite falling from the unbeaten ranks it has conceded the fewest goals (six) in the league. And Santiago Mosquera scored his first MLS goal to tie the game seven minutes after FCD fell behind.
9. LA GALAXY (3-4-1), 9. A rally from two goals down should have earned at least a point but there were two goals disallowed on tight decisions. Still, the Galaxy did not finish strong after Giovani dos Santos had tied the match, 2-2, with his first MLS goal in a long, long time.
10. HOUSTON (2-3-2), 10. An early goal by Alberth Elis and a 19-6 shot advantage did not stand up on the road. Like many teams at this point in the season the Dynamo can’t seem to gain enough traction to deliver consistently good performances.
---------------------------------------------------------
11. COLORADO (2-3-2), 11. The Rapids led 1-0 at halftime on a Dominique Badji goal but struggled to keep pace in the second half. Isn’t the away team supposed to succumb to the altitude?
12. VANCOUVER (4-4-1), 13. The ‘Caps prevailed despite losing goalscorer Cristian Techera to a second caution for removing his shirt after converting a penalty kick. In bizarre fashion did the rash of red cards continue but at least a three-game losing streak ended.
13. COLUMBUS (4-3-2), 15. After missing the first eight games with a knee injury, offseason addition Mike Grella came off the bench to score the late winner. Crew SC ended a four-game winless streak.
14. PORTLAND (2-3-2), 14. Sat out the week’s action, goes for a third straight victory at San Jose on Saturday.
15. REAL SALT LAKE (3-4-1), 12. A timely tackle by Justen Glad kept Vancouver off the board temporarily but for the third time this season RSL followed up victory with defeat.
---------------------------------------------------------
16. CHICAGO (2-3-2), 17. The Fire struck with a stoppage-time stunner by Alan Gordon to earn its eighth point in the last five games. Losses in the first two games of the season are receding from memory as Bastian Schweinsteiger and a couple of newcomers get their bearings.
17. TORONTO FC (1-4-1), 16. TFC coughed up a 2-0 lead imposed midway through the first half on goals by Jonathan Osorio and Victor Vazquez. Back line needs time to heal and regain sync as team recovers from heavy CCL hangover.
18. PHILADELPHIA (2-3-2), 21. Newcomer Borek Dockal atoned for a few lackluster displays by roofing the winner in the 72nd minute and the Union showed some resolve by nailing down the three points. Earlier goals by Ilsinho and C.J. Sapong offer some optimism on the attacking side, at least.
19. SEATTLE (1-4-1), 18. The Sounders’ gritty display nearly got them a point and gave some good supply to Clint Dempsey, who placed two of his five shots on goal.
20. MINNESOTA UNITED (3-5-0), 23. The Loons were rewarded for their resolve when Ibson scored their second goal in the 70th minute. They prevailed despite losing Christian Ramirez to injury after half an hour; the rally began 10 minutes later with a PK from Darwin Quintero, who may not be flashy or dominant but is an impact player nonetheless.
---------------------------------------------------------
21. SAN JOSE (1-4-1), 19. Injected with momentum by a Danny Hoesen equalizer on the stroke of halftime, the Quakes battled through the second half but conceded a late winner with midfielder Magnus Eriksson trying to fill a huge gap in the back line. So it goes.
22. D.C. UNITED (1-4-2), 20. After taking the lead, falling behind, and then coming back to equalize, D.C. had at least a point in hand but again fell asleep defensively.
23. MONTREAL (2-6-0), 22. The Impact is devolving into the league’s worst second-half team. In losing four straight, it has conceded 13 of 16 goals after halftime. Saphir Taider’s header brought him his first league goal and a temporary lead.