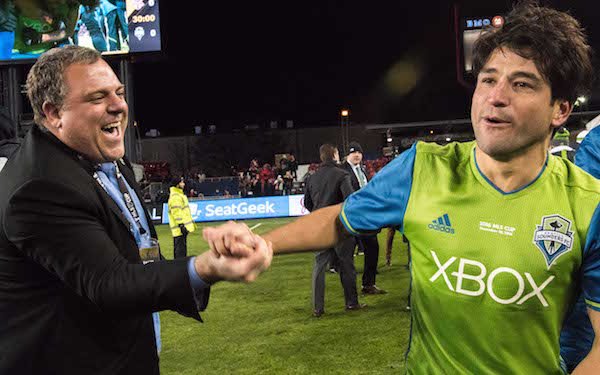 For their first eight seasons, culminating with their first MLS Cup in 2016, the Seattle Sounders set the standard in MLS.

The Sounders broke MLS attendance records year after year and signed Designated Players like Clint Dempsey, who was the first big-name American to leave Europe for MLS in 2013.

But Seattle no longer rules the roost.

Atlanta United draws more fans, and the Five Stripes and other teams are spending more on players than Seattle with an influx of Designated Players.

Garth Lagerwey, the Sounders' general manager and president of soccer since 2015, dares say it isn't necessarily a bad thing that Seattle is no longer MLS's biggest spender.

"It's bonkers, man. You can't keep up," Lagerwey told Andrew Wiebe on ExtraTime Live from Banc of California Stadium, where the Sounders helped open LAFC's new stadium. "Just looking at the level of the players teams are acquiring and how fast the envelope is getting pushed, it's cool. It's a really good time to be part of MLS."

And it requires, Lagerwey said, that the Sounders be more efficient.

He credited Seattle's fan support -- the Sounders broke the league average attendance record six times before Atlanta United shattered it in 2017 -- with allowing the club "to punch above our weight."