JP Dellacamera on the craft of the play-by-play announcer, how he got into soccer and the three greatest games he's called

JP Dellacamera's work in Russia doing play-by-play for Fox will mark his ninth men's World Cup, six on TV and three for radio. Dellacamera, also the play-by-play man for the Philadelphia Union, has done TV broadcasts for five Women's World Cups. His work in soccer dates back to 1978 with the old NASL's Detroit Express. 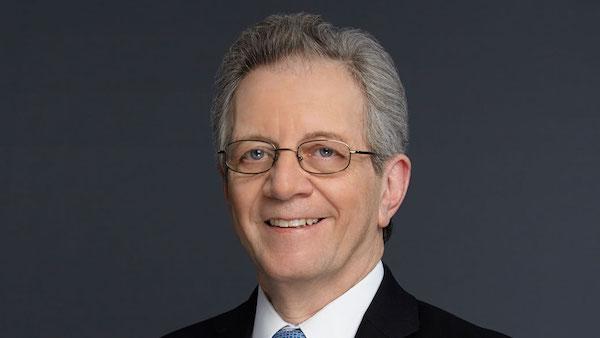 SOCCER AMERICA: What was your introduction to soccer? Was soccer a part of your childhood?

JP DELLACAMERA: As a young teen, growing up in Boston, I used to go to Boston Beacons games in the old NASL. They lasted one season playing home games at Fenway Park. I would watch any soccer I could on TV, although back then it was very limited.

SA: When did you decide you wanted to be sports broadcaster? Was there a moment when you said to yourself, this is what I want to do!

JP DELLACAMERA: My Mother tells me that I mentioned wanting to be a sportscaster in my high school yearbook. I loved all sports and growing up in the Boston area, we had the four major sports in our backyard. I had a love for both sports and music and thought about careers in both. At the end of the day, I believed more in the the sports field and the fact that your career could last longer in sports than as a radio disc jockey.

SA: Did you have role models in the field?

JP DELLACAMERA: I do look up to a lot of people as professional role models. I always enjoyed and respected the work of Al Michaels, Bob Costas, Doc Emrick and so many others, and I still do. But of all the broadcasting greats, the one I learned the most from was Brent Musburger. Musburger, to me, defined the greatest moments in a game. He was the best at relaying drama in a sports event. Knowing when to talk, when to lay out. What to say and how much to say.

SA: What was the first soccer game you broadcast? Anything remarkable you recall about it?

JP DELLACAMERA: The first soccer game I broadcast was as a fill-in radio guy. I called the first two games of the Detroit Express of the NASL. They won both games, on the road, at Tulsa and at Ft. Lauderdale. Among the players on that team were Trevor Francis and Alan Brazil. Following that, I did radio for the Pennsylvania Stoners of the ASL. I worked the 1980 season when they won the championship. The Stoners were somewhat ahead of their time even in a lower league. They had a jersey sponsor before anyone I can remember in the USA. The name on the jersey was Alpo, as the dog food company was based then in Allentown where the Stoners played. 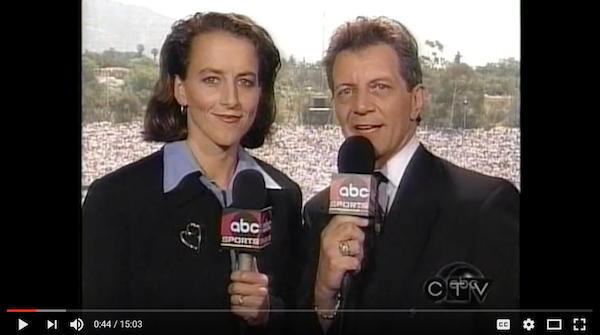 SA: What’s most enjoyable and most difficult about TV play play-by-play?

JP DELLACAMERA: The most enjoyable part about play-by-play is that you get to see the finished product. All of the notes you have studied, and the tape that you have watched, now comes out somewhere in the telecast. It's like studying for a final exam, then taking it. If you have prepared properly, there is a satisfaction to the end result.

The most difficult part is knowing that out of all of the hours of studying, if you are fortunate, maybe 30% of what you studied actually comes out on the telecast. If more than 30% comes out, I would say that announcer talked too much. All announcers, myself included are guilty of that. The idea is not to be guilty too many times. Sometimes you have a great note that doesn't get on air, but that beats forcing something in that didn't have to go into the show at least at that particular moment in time.

If JP Dellacamera could make a soccer rule change ...

It would have to do with the offside call, especially now with Video Assistant Referee in play. To me, if you have to look at a replay six times or more to show if someone is offside, that goal should count. There are not enough goals in our game so we should not be taking away good goals. Clear and obvious error is the wording we hear. If a player's foot is millimeters offside, is that a clear and obvious error? Do we have to stop the game for that?

SA: Is there anything from calling hockey games that honed your skills for calling soccer? And maybe vice versa?

JP DELLACAMERA: I think you learn something from all sports that you call and it helps you with the other sports. I have called soccer, hockey, and basketball, and have learned things from each, that I incorporate into the other. While hockey is the closest to soccer in terms of movement, there is drama and key moments in each sport, that can help you on the air. Back when I did indoor soccer, the indoor coaches would pick the brain of the local hockey coach to see how they set things up like their power play. Indoor soccer took a lot from the NHL back in the 1980s.

SA: You called quite a bit of indoor soccer during its heyday in the USA ...

JP DELLACAMERA: People tend to forget the indoor game. In the mid to late 1980s and even the early 1990s the old MISL was the game in town. ESPN had a game of the week package. There were many crowds of 18,000-plus in many arenas during that time. Back then, there was no MLS or other top flight league, so the best players who played in this country, played indoor soccer. I don't think indoor soccer has ever gotten its due in our soccer landscape. 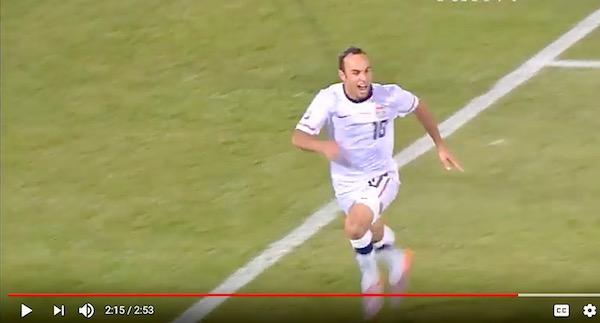 "Algeria could have ended this one. Instead it's the U.S. galloping ahead ..." -- JP Dellacamera's ESPN Radio call on Landon Donovan's historic 2010 World Cup goal against Algeria.

SA: You did radio for the last two World Cups. Are there aspects of radio play-by-play that you particularly enjoy? (I would think it would be harder work, because you need be very precise about announcing each player's name, while also letting viewers know where the ball is and how play is unfolding.)

JP DELLACAMERA: No question that radio is more difficult than TV when it comes to soccer, and other sports for that matter. On TV, you can just say things in so few words as people can see the pictures. For radio, you are painting the picture. It's a more powerful medium in that your audience is probably listening more to your every word than they are on TV. You can multi-task and watch a soccer game on TV, but that would be more challenging to multi-task while listening to a radio call. The last World Cup I called on radio was all off the monitor, so for radio that was even more of a challenge since you can't see everything. Calling a game off monitor for TV has its challenges, but radio off the monitor is more difficult because of the greater description of where the ball is at all times.

SA: Any particularly memorable challenges or surprises you faced while calling games?

JP DELLACAMERA: I called the opener of the 1990 World Cup between Cameroon and Argentina. In our production meeting no one (including me) even discussed the possibility of Cameroon winning. As a result, thinking back, we probably did not do a good job in making a comparison to any similar upsets in the past.

In the old days of ESPN International, Tommy Smyth and I called a few games where at the time of kickoff, we did not have a starting lineup, only an overall roster sheet. It was a few minutes after kickoff where someone got a lineup to us.

Also, in those days Italian teams played in what was called a triangular tournament. Three teams, each team would play a 30-minute game vs. the other. I think it was the losing team that had to play the second game right away, and wouldn't you know it, for the second game they changed their jersey numbers. So the No. 9 from the first game that AC Milan played was not the same No. 9 in that second game, and it wasn't just one player who would have their number changed.

We called Brazilian games that were played in a torrential downpour. No HD TV to give us a good picture. Instead, we got to call games where there was really no clear way to see players numbers. Those were very difficult to call.

Through my broadcasting career I have been so fortunate to have called so many big games and meaningful games in United States Soccer history.  I don't rate them in order as all are special and unique in their own ways, but here are my three most memorable games: 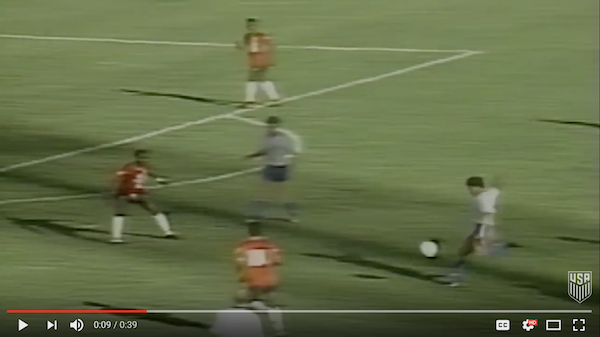 Trinidad and Tobago 0 USA 1. (World Cup qualifying, Nov. 19, 1989 in Port of Spain)
I remember the crowd arriving hours before, a sea of red in the stadium, the music and the singing hours before and during the game. I recall people painting their faces, cars, and houses red, and the country declaring the following day a national holiday. They were expecting to win.  And of course, the Paul Caligiuri goal. I know what it meant in that particular game, and what it has meant moving forward.

USA 0 China 0, PKs 5-4. (Women's World Cup, July 10, 1999 in Pasadena, California)
Another sold-out stadium [90,185], another big-time event. Like a good heavyweight prize fight, both the USA and China gave each other their best punches over 120 minutes.  At the end of the day, losing on penalty kicks is cruel, but that's what happened to China. The USA won the World Cup, one year after the U.S. men finished dead last at the 1998 World Cup in France. The crowds were record-setting and so was the television viewership, setting records for women's soccer, soccer, and women's sports. 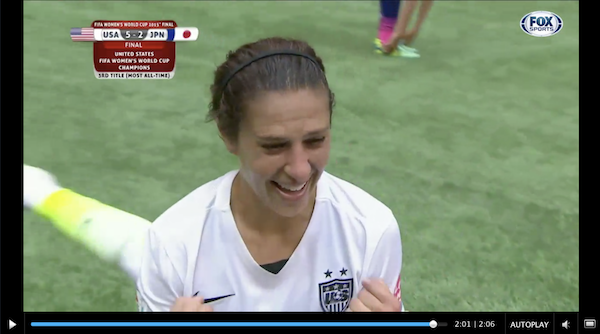 USA 5 Japan 2 (Women's World Cup final, July 5, 2015 in Vancouver)
I have to add this to the list because of what we saw in that dismantling of Japan, and the one woman show in Carli Lloyd. That was as big a performance in a final of any sport in the women's or men's game. Take nothing away from her teammates, but Carli took this one over and really became a household name in this country. I add this to the list too because Fox went all out in a big way in their first World Cup, and it showed in so many areas. Another TV ratings record was set despite the fact that compared to 1999, so many people now watch games in so many places other than television.

men's national team, television
6 comments about "JP Dellacamera on the craft of the play-by-play announcer, how he got into soccer and the three greatest games he's called".
Read more comments >
Next story loading