Less than one-quarter of the MLS season has been played, yet it’s already clear into which categories the teams can be cast.

Most of what we will call "elite" teams are in the Eastern Conference, which means other than Sporting Kansas City and Los Angeles FC their Western counterparts will be trapped in the playoff “bubble” for much of the season. Any bubble team can climb into the "contender" category by reeling off three or four straight wins. (That is ‘contender’ defined as a team in line for the playoffs, not necessarily reach the MLS Cup final.)

Conversely, it’s not that a far a drop from a contender to a bubble team and in a season to be disrupted by the World Cup and what could be a very active secondary transfer window, much movement can be anticipated in August and September as changes spark improvement or fizzle out.

For the time being, we are setting aside teams that already look like longshots to make the playoffs, such as D.C. United and San Jose. United moves into its new stadium in mid-July, which could be too late to make a playoff push but it too early to be mathematically eliminated. San Jose is just eight games into the regime of head coach Mikael Stahre; with all the changes it has made the past 18 months, including the hiring of a new GM and team president along with Stahre, and so the Quakes -- like the Rapids -- are a work-in-progress.

The 10 teams that play matches on Wednesday will be evaluated on Part I of this early-season report. The other 13 teams will be categorized in Part II to be disseminated Friday.

ATLANTA LEADS THE ELITE. As Toronto FC works its way back into the league campaign following a long and ultimately bitter run in the Concacaf Champions League, Atlanta United heads the pack of challengers. It hosts Western Conference leader Sporting Kansas City Wednesday in a matchup of new wave and old school as well as the two highest-scoring teams in the league.

After its spectacular expansion season, AUFC didn’t need to make significant changes, yet it still ran down the rights to Ezekiel Barco, who bagged his first goal last weekend in a 2-1 comeback defeat of Chicago. In has played a 3-4-1-2 formation with Greg Garza and Julian Gressel as wingbacks and another offseason acquisition, Darlington Nagbe, funneling the ball forward with passes and dribbles from central midfield. 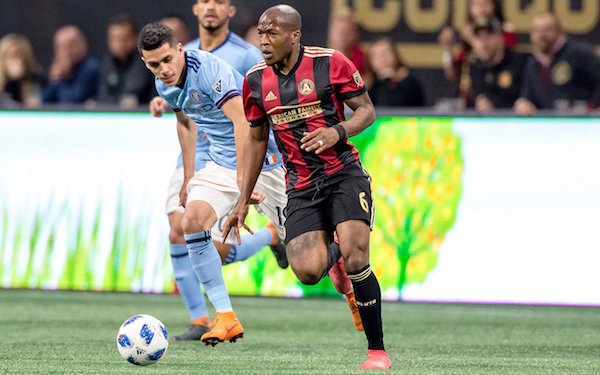 No team can match AUFC for attacking talent. It moves the ball fast and sharp seemingly at will. Josef Martinez scored 19 goals last year (in just 20 games) and this season already has seven. The question, as was the case last year, is how resilient it will be with a back line anchored by Michael Parkhurst and Leandro Gonzalez Pirez and shielded by veteran Jeff Larentowicz.

In SKC, it meets an opponent that has added to firepower to the league’s toughest defense even though an injury sidelined Felipe Gutierrez after he’d nailed five goals in his first six MLS games.  Another newcomer, Johnny Russell, has also scored five goals and Homegrown product Daniel Salloi bagged his second of the season in a 1-0 defeat of Colorado last weekend.

If anyone can devise a way to slow down Miguel Almiron, it is SKC head coach Peter Vermes. Unlike Atlanta, which after the game Wednesday heads to Orlando for another clash of hot teams, SKC doesn’t play on the weekend. So Vermes can play this game more aggressively than normal; SKC has posted four shutouts in its last six games and so he can be confident in his defense, except for the fact Atlanta is adept at eviscerating opponents on its home field.

SKC has fallen in the Knockout Round the past four seasons but the 2018 version appears to be a stayer, not a fader.

FINALISTS HEADED IN OPPOSITE DIRECTIONS. Toronto FC is still the league’s best team; the status of its opponent in the last two MLS Cup finals is open to question. Five months after losing the 2017 title game at BMO Field, Seattle returns to Toronto mired in adversity. It has scored a league-fewest five goals.

Decimated by injuries -- Jordan Morris, Nicolas Lodeiro, Victor Rodriguez -- in the attack, the Sounders exasperated the CenturyLink Field crowd last weekend by failing to score during the final 20 minutes of a 0-0 tie playing 11-against-10.  With a rivalry game Sunday at Portland looming just ahead, they won’t be at full throttle in Toronto, which won’t please the fans but is about the only course of action head coach Brian Schmetzer can follow until the ranks get stronger. 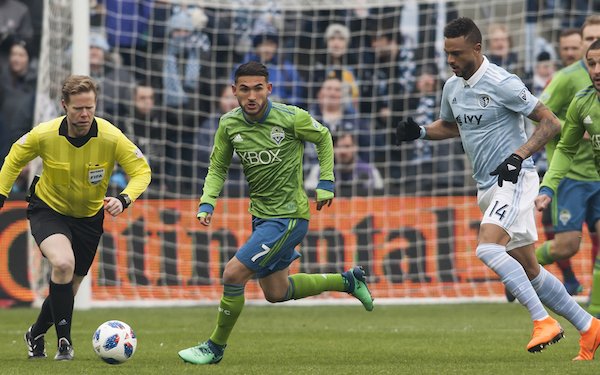 For TFC counterpart Greg Vanney, he doesn’t have to worry about losing Jozy Altidore and Michael Bradley for six weeks because of the World Cup. (Altidore will miss about a month after undergoing foot surgery this week.) TFC looked completely in command while beating Philadelphia, 3-0, last Friday and against the wounded Sounders are primed to roll up another win against a tougher opponent.

For now, both TFC and Seattle can be counted among the league’s elite. That may not be the case in three months. With an impaired attack Seattle has looked only average defensively: nine goals conceded in seven games. Even when healthy it will need a course correction sooner or later.

QUARTET OF QUESTION MARKS. Four Eastern teams currently occupying the fifth, seventh, eighth and ninth rungs on the conference ladder play each other on Wednesday, and for none of them the landscape looks very lush. Right now they are all bubble teams on the playoff list behind Atlanta United, Orlando City, and the New York duo.

Columbus labored through those 20 minutes in Seattle without Pedro Santos to extract its fifth road point in as many games. It hosts Philadelphia Wednesday while fifth in the conference and dead-last in league attendance (10,255) among teams with a long-term home (D.C. United has averaged 8,762 for two games in one-off venues).

The Austin ambitions of Precourt Sports Ventures are gathering steam, which impairs the efforts of head coach Gregg Berhalter to keep his players focused on the games. This one against Philly is the first leg of a home double-dip; Crew SC hosts another of the bubble bunch, Chicago, on Sunday.

Forward Gyasi Zardes has cooled off after scoring three goals in his first two games for the team; he’s tallied two (of the team’s seven) in the last eight games. In four of those games, Crew SC has been shut out; it tied the Union, 0-0, at Talen Energy Stadium on St. Patrick’s Day. It returned to the playoffs last year after missing out in 2016 and its cloudy future could tip it either way this season. If it can ignore the small home crowds and get at least four points this week its spot in the playoff tier would be very secure.

Since that last meeting the Union has won only once, a 3-2 defeat of lowly D.C. United. It faces a quick turnaround and a trip to Montreal to take on the Impact Saturday, and with the large gap separating it from sixth place the margin for error is already shrinking.

Like the teams around it in the standings Philly doesn’t spend at the rate of the Eastern elite. Its high-profile offseason acquisition, Borek Dockal, scored his first MLS goal against D.C. to burnish his image somewhat. He provided seven key passes to teammates in that game and the Union needs feeds from him in every game to get into the chase.

Montreal is adjusting to new head coach Remi Garde; Chicago is trying to recapture the persona of 2017, when it broke through a four-year playoff drought. Neither team

The Impact responded to criticism from Garde last week to drill New England, 4-2, yet its 23 goals conceded – most in the league – indicate the most pressing problem area. Keeper Evan Bush has faced a league-high 74 shots and is first in saves with 51, and is still conceding 2.56 goals per game. Not even superman Ignacio Piatti can do anything about that leaky a defense.

How are things going for the Fire? Bastian Schweinsteiger is playing in the back and leads the team with four assists. Newcomer Aleksandar Katai has done all right (two goals, no assists in seven games) but not great. Club officials are trying to woo striker Fernando Torres, a former teammate of head coach Vejlko Paunovic when they played together for Atletico Madrid.

Paunovic told the media last week Torres is a “complete superstar.” But would his signing make the Fire a complete team? No. The Fire stumbled during the second half of the 2017 season and so far this year the stumbling persists. If nothing else, Torres could add firepower as striker Nemanja Nikolic regresses to the mean.

The quartet of head-to-head games in a few days amongst four teams packed together in the standings can’t predict where they will finish yet will measure them for quality, depth, and versatility.

THE WESTERN SCENE. You have to feel a bit for Minnesota United. In its expansion year, it inevitably faced comparison with high-spending, high-flying counterpart Atlanta. This year, it finds yet another ambitious fledgling -- Los Angeles FC -- in its conference and on its schedule twice, starting Wednesday at Banc of California Stadium.

The Loons don’t move into their own new home, Allianz Field, until next year. They’ve made strides from last season, during which they won 10 games and missed the playoffs by 10 points, but long-term will have trouble overcoming the season-long loss of Kevin Molino. They reacted quickly to his injury by completing the deal for Darwin Quintero, which should allay any fears team management is signing off on the last season at TCF Bank Stadium.

Despite being down a man for 40 minutes last week, they got a goal from Miguel Ibarra and posted their first shutout of the season, 1-0, against Vancouver. Bobby Shuttleworth, who labored through the inevitable ups and downs of a young keeper in New England, is consistently cranking out impressive displays.

LAFC is off to a great start. In its new digs, it has a win and a tie. Its defending has been spotty but the attack, while not quite Atlanta-caliber, is tied for third in goals per game (2.25). Carlos Vela, Diego Rossi and Benny Feilhaber already look well-connected, Lee Nguyen debuted for LAFC off the bench last week in a 1-1 tie  against FC Dallas. In both of its home games LAFC has scored just once. Opponents have reacted to its potent attack by tightening up their resistance and sitting deeper in defense. 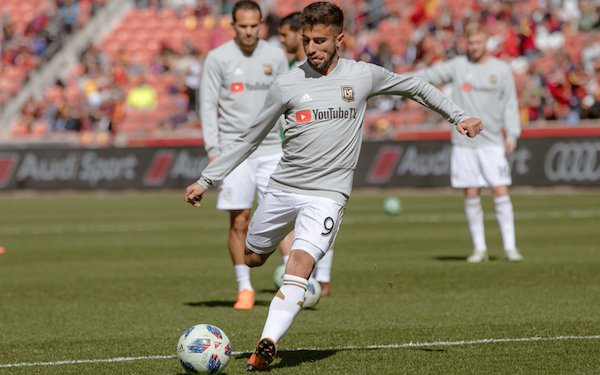 The Loons have not defended well -- 16 goals conceded in nine games -- and despite the blanking of Vancouver need more from the six players in front of Shuttleworth. The revival of FCD, upgrades at SKC, coaching change in Portland, and arrival of LAFC have altered the Western landscape and steepened the challenge for teams like Minnesota United.