More Problems with VAR and Goalkeepers

The oddities that surround VAR decisions continue to baffle. Last Wednesday’s decision to nix Atlanta’s early goal against Kansas City, for example. A rotten decision that simply does not correspond with what the rule says -- which is: “A player in an offside position receiving the ball from an opponent who deliberately plays the ball ... is not considered to have gained an advantage.”

OK. Josef Martinez was definitely “in an offside position.” Equally obviously, he “received” the ball from an opponent -- KC’s Jimmy Medranda -- and then scored his goal. Referee Mark Geiger initially allowed the goal. Then came that irritating trek to the sideline to peruse the monitor. No goal was the decision.

Geiger’s later explanation, trying to make out that Medranda did not play the ball, is quite astonishing nonsense: “The Sporting Kansas City defender [Medranda] reacted by planting his foot in the ground in an attempt to block the ball. The ball hit him, deflecting to an Atlanta United player [Martinez] in an offside position.”

This is referee-drivel of the worst type. Using gobbledygook in an attempt to justify a bad call. The play itself, captured perfectly by excellent replays, is quite clear, free of any ambiguities. Atlanta’s Ezequiel Barco has the ball, he threads it forward, between several KC defenders towards Martinez (who, I repeat, is certainly in an offside position). None of the KC defenders is in a position to intercept the pass (a measure of Barco’s skill, if you like). The only one with any hope of intercepting the ball is Medranda. He does the best he can, sticks out his right leg in a clear attempt to play the ball. He does play it -- alters its path slightly, but not enough to stop it reaching Martinez.

That sequence contains nothing obscure or arcane or difficult to take in. But Geiger cannot allow that Medranda “played” the ball -- that would totally sabotage Geiger’s argument. So, he has Medranda “planting his foot in an effort to block the ball.” Despite the obvious fact that Medranda’s foot does make solid contact with the ball (which we can assume is exactly what Medranda is trying to do) Geiger manages to invert that action and claim that “the ball hits him, deflecting to an Atlanta opponent.”

Ahah! Geiger has now managed to get the word “deflecting” into his B.S. That will tell everyone that Medranda did not play the ball, but the ball played him.

Enough of this laughable hogwash. Medranda clearly played the ball. He was in a desperate situation and in all probability was actually trying to deflect the ball away but could not get enough of it to stop it from reaching Martinez. That’s all we need to know. The rule defines “a player who deliberately plays the ball.” That’s all. Nothing more -- it does not say that the player has to have control of the ball, or that he must be passing it. He just has to play it. Which means nothing more elaborate than a deliberate attempt to make contact with it.

Geiger’s use of VAR to reverse a good call is lamentable enough. His twisting and distorting of the rule’s wording is unworthy of him. Yet another example of the extraordinary lengths that referees will go to give advantage to defenders.

A pity, because later in the game, Geiger deserves praise for red-carding Atlanta goalkeeper Brad Guzan -- a call that, in these be-kind-to-keepers days, calls for guts. Though even here the praise must be muted. Guzan’s foul on Khiry Shelton was appalling. A potential leg-breaker. Yet the MLS stats tell us that Geiger gave the red not for the violence, but because Guzan denied an obvious goal-scoring opportunity (DOGSO). 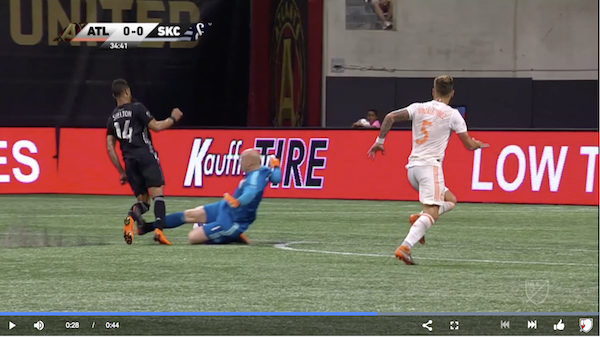 This is disturbing. The rules state that “when more than one offense occurs at the same time” the referee must punish “the more serious offense in terms of sanction.” This is designed to ensure that the offender gets the maximum punishment. As it happens, the punishment for DOGSO and for endangering the safety of an opponent is the same -- a red card.

Geiger had a choice. He evidently opted to award the red card for DOGSO -- a decision which certainly downgrades the importance of “the safety of an opponent.”

Guzan himself does not exactly exhibit any concern for opponents’ safety. When in England, he knocked out an opponent cold during a goalmouth melee. And earlier this MLS season he smashed into one of his teammates, Franco Escobar -- a “coming together” that resulted in Escobar being sidelined for over a month.

The more normal reluctance to punish goalkeepers was in evidence during Wednesday’s Chicago-Montreal game, in which Chicago keeper Richard Sanchez threw himself at Ignacio Piatti’s feet, brought him down, while making no contact with the ball at all. Penalty! Of course not. Simply no call from referee Sorin Stoica.

That refusal to call blatant penalty kicks was at its worst in the May 2 UEFA Champions League game between Roma and Liverpool. Highly rated Slovenian referee Damir Skomina failed to call (or even to see?) a blatant handball by Liverpool’s Trent Alexander-Arnold in the second half. Shortly before that, Liverpool goalkeeper Loris Karius had tripped Edin Dzeko -- but the foul was not called as Dzeko was punished for being offside -- which the replays showed was not so.

In all these goalkeeper episodes, the only call made against a keeper was for the technical offense of denying a scoring opportunity. Not once was a goalkeeper punished for rough play.

We can return to MLS for perhaps the most damaging example of this leniency and the mindset it relies upon. April 29, the grand gala day of the opening of Los Angeles FC’s new stadium. In the 29th minute, Seattle’s keeper Stefan Frei jumps into a group of player to grab a high ball. Which he does ... much to the enjoyment of TV guru Alexi Lalas, who proclaims in commanding macho tones, “That’s how you come out and get a ball, calculate that whole forest [of players], make your way through. Not a problem.”

But there was a problem. LA’s Marco Urena was on the ground, needing treatment to his head. Replays showed Frei’s forearm making contact with Urena’s head. Lalas was unimpressed, ignored it, and mentioned only, and dismissively, “Uh, just a knee in the back,” and allowing that Urena could complain “a little bit.”

So that was that. Not a problem. Well, not quite. Someone on that telecast decided a third replay was necessary (you can be sure it wasn’t Lalas) -- that came five minutes later. Play-by-play man John Strong introduced it and had to admit that it showed head contact, though “just a little graze.” Lalas came up with “That’s why he was irritated,” adding in a mumble a few words that I could not make out, but which ended with the word “fine”.

The attempts by both Strong and Lalas to imply that nothing serious had occurred were unmistakable. But how would they know? How could they be so sure? They might have paid more attention to Frei, who -- when Urena finally got to his feet -- tried to approach him with some sort of sympathy. Frei would not be doing that for “just a graze.” Urena brushed him off -- something not pleasant to watch -- but Urena knew he was in trouble.

For sure he was. We now know that Urena needed surgery for “facial fractures” and will be out at least month. Bad news for LAFC -- but potentially disastrous for Urena and Costa Rica. Urena is arguably the key player on Costa Rica’s World Cup team. His injury, his graze, could mean that he misses the tournament, now only just over a month away.

Of course, Frei was not called for a foul by referee Kevin Stott. We know that isn’t what referees do to goalkeepers, though they obviously should. Howard Webb, now in charge of MLS referees, assured us at the start of the season, that his referees would be paying close attention to such fouls. Was that just talk, then? Guzan sidelined his teammate Escobar for over a month, Frei has seriously injured Urena. And neither goalkeeper was called for a foul.

Backing up that unacceptable refereeing attitude are the opinions displayed by Strong and Lalas (and, indeed, most of the TV gurus) that, in these incidents, the goalkeepers are to be praised for their bravery, while their opponents never really get hurt -- just a graze, or just a knee in the back.

And if Urena does miss out on the World Cup? Not a problem, Alexi?