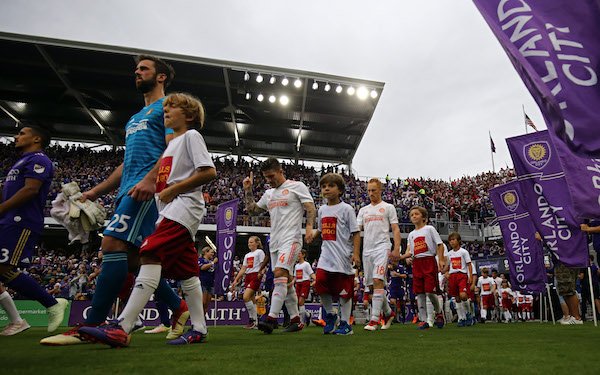 Much has been made of how hard it is for visitors to play at Atlanta United's Mercedes-Benz Stadium, but the Five Stripes are becoming quite a force on the road.

Four days after its 2-0 loss to Sporting Kansas City -- just its second ever at Mercedes-Benz Stadium -- Atlanta United moved back into the top spot in the MLS Supporters' Shield race with a 2-1 win at Orlando City, the hottest team in MLS, for its fourth straight win on the road.

The four wins in five games -- Atlanta United opened the MLS season with a 4-0 loss at Houston -- match its win total on the road in its first MLS season.

“It’s very important, especially in a league where winning on the road is so difficult," said Atlanta United coach Tata Martino. "I think it’s really important and I think we’re deserving of it, and even more so coming off of a loss at home on Wednesday.

Two goals in the first half hour from Josef Martinez and Ezequiel Barco staked the Five Stripes to a 2-0 lead that Orlando could not overcome.

Martinez scored his league-high eighth goal of the season with a penalty kick in the 11th minute after Greg Garza was fouled by Cristian Higuita in the area. Barco's second career goal for Atlanta United was struck with the outside of his foot, ricocheting off the crossbar into the goal.

Like against Sporting KC, Martino employed a 3-5-2 formation at Orlando City so Atlanta United could press the opposition.

“The idea was to neutralize their attacking players," he said, "so we wanted to make sure that even when we had the ball, when we were in possession, when we were attacking, we always had their attacking players close to us, like [Justin] Meram, [Sacha] Kljestan, [Dom] Dwyer, [Chris] Mueller, just so we were always aware of those players so that they couldn’t hurt us if we lose the ball.”

Orlando City scored 17 goals in its last six games, all wins, but only Meram scored on Alec Kann, filling in for suspended Brad Guzan in goal and making his first appearance in 2018 after being sidelined with a knee injury.

"I thought I did pretty well," said Kann, who started in goal in 2017 until Guzan arrived from Middlesbrough in July. "A lot of playing goalkeeper for this team is being able to help us build out of the back. I think I helped us relieve pressure, helped us get out of their press, which was pretty high at the start and was high for most of the game."

Orlando City has a big advantage in corner kicks -- 9-1 -- but Kann handled what the Lions threw at him well.

"It was a difficult game," said Martino, "but I thought he did his job, especially with a lot of set pieces and a lot of corners that Orlando had. But I think you didn’t notice the length of time that he was out.”