World Cup Retro 1966: Five names to have at your fingertips

Here are five names to have at your fingertips about the eighth World Cup, hosted and won by England.

Pickles. The solid gold World Cup trophy was put on display at the National Stamp Exhibition in London before the tournament -- and vanished. The host nation’s embarrassment was relieved when a dog named Pickles discovered it while sniffing around a garbage dump in South London.

Eusebio. While Pele was the victim of a trend toward violent soccer, Mozambican-born Eusebio (the “Black Panther”) ensured himself a place in history as one of the world’s greatest players by leading Portugal to third place. He scored three first-round goals, including two that helped eliminate Brazil, and four goals in a 5-3 quarterfinal win over North Korea – which had upset Italy in the first round and took a 3-0 lead over Portugal. Eusebio finished with a tournament-leading nine goals.

Antonio Carbajal. With the USA failing to qualify since the 1950 World Cup, Mexico was Concacaf’s lone representative for the fourth straight finals. In England, Antonio “El Cinco Copas" Carbajal made his fifth World Cup appearance, a record not matched until German Lothar Matthaeus' 1982-1998 run. El Tri tied Uruguay and France, but fell, 2-0, to host England, failing on its sixth try to reach the second round. 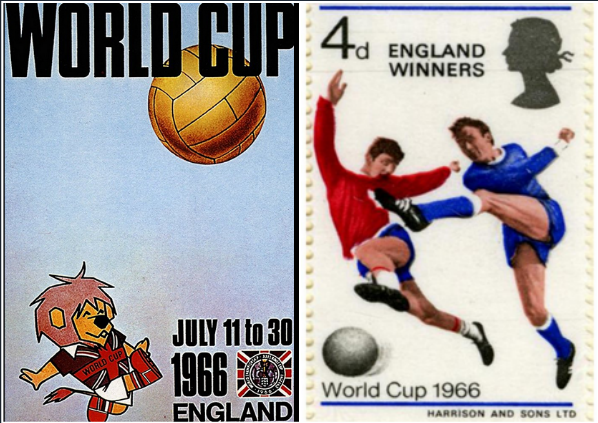 Geoff Hurst. England coach Al Ramsey changed his team’s formation from a 4-3-3 to a 4-4-2. After starting slow with a 0-0 tie against Uruguay, the “Wingless Wonders” – inspired in attack by Bobby Charlton with a defense marshaled by Bobby Moore – reeled off wins against Mexico, France, Argentina and Portugal to reach the final against West Germany. An 89th-minute goal by Wolfgang Weber tied the game at 2-2 and sent it into overtime. Geoff Hurst remains the only player to score a World Cup final hat trick, although his strike to give England a 3-2 lead was highly controversial as it hit the underside of the crossbar and bounced off the ground and back into play -- with linesman Tofiq Bahramov ruling it had crossed the line. Hurst scored his third in the final minute for a 4-2 win and 93,000 fans in Wembley celebrated as Queen Elizabeth II presented Moore the trophy.