Neymar should be ready to go at Brazil training camp

Brazil head coach Tite released his squad of 23 players at a news conference in Rio de Janeiro on Monday, and it included only three Brazilian-based players: Corinthians' Cassio and Fagner and Gremio's Pedro Geromel. 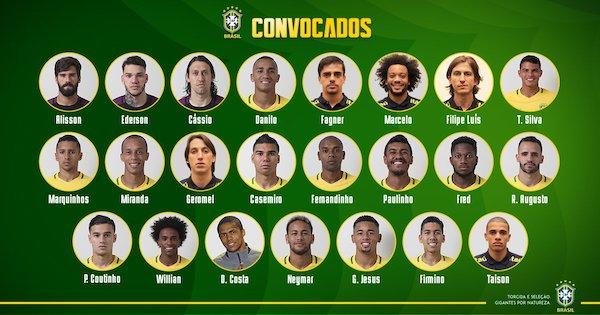 Local options. The spotlight will be on the 28-year-old Fagner as a possible choice at right back for Dani Alves, who out the World Cup with a knee injury suffered last week.

Tite noted the play of Geromel for Gremio in last season's Copa Libertadores campaign. “Gremio have played at a high level for the last two years,” he said.

Cassio will go to Russia as the No. 3 keeper behind Alisson (Roma) and Ederson (Manchester City).

Shakhtar surprises. Of the European-based players, the only surprises were the inclusion of the Shakhtar Donetsk pair Fred and Taison. The Ukrainian club had reached the round of 16 of the UEFA Champions League, where it lost to Roma on the away goal rule.

Neymar fitness. Brazil dominated South American qualifying, but it chances in Russia will likely depend on the fitness of Neymar, who has been recovering from foot surgery in March.

"This is the final stage of his recovery," said Brazil team doctor Rodrigo Lasmar. "He will be able to go to training sessions soon, and will play the friendlies."

Tuneups. Brazil will play Croatia in Liverpool on June 3 and Austria in Vienna on June 10. It will assemble at the national training center in Teresopolis on May 21 before heading to London for training a week later.

First round. Brazil will open against Switzerland in Group E on June 17 before playing Costa Rica and Serbia.