The Argentine soccer federation (AFA) was forced to apologize after it came in for intensive criticism for distributing a manual on how to get by during the World Cup in Russia that included a page, "How to stand a chance with a Russian girl?" 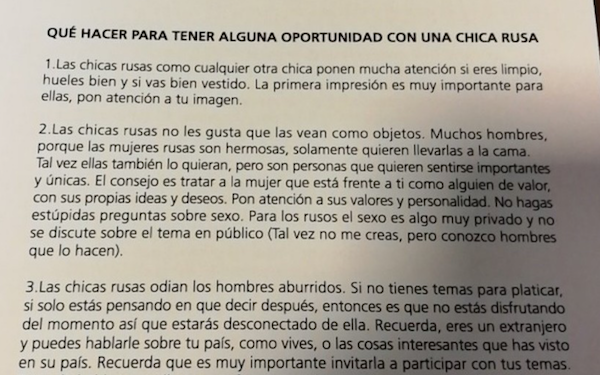 "Lots of men," the manual noted, "because Russian women are beautiful, just want to take them to bed. Maybe they want it, too, but they are people who want to feel important and unique.

"Lots of Russian women, like other women, pay close attention to if you are clean, smell good and are well dressed. The first impression is very important for them, pay attention to your image."

The section was posted on social media by one of the course's attendees after Russia teacher Eduardo Pennisi distributed the manual as part of a course on Russian language and culture. The course was open to executives, coaches and players as well as journalists who will be at the World Cup.

The AFA collected the manuals and removed the pickup section. It said it was intended to be distributed to staff as a "joke," not to be part of the training course. "Administrative personnel removed the manuals immediately," it added.

Pennisi disputed the AFA's version of events, telling Clarin,the AFA had "approved" the section, which he had downloaded from an online blog, a month ago.