UBS had a team of 18 analysts and editors set out to predict the World Cup champion, and they ran a computer simulation of the tournament 10,000 times, publishing the results as part of a 17-page research brief for the bank's investors. 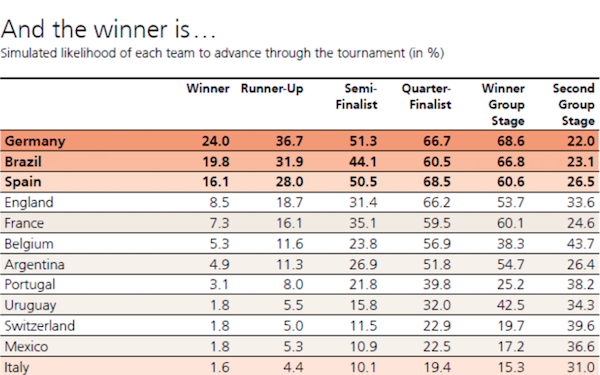 The likely winners, in order, are Germany, Brazil and Spain, all good choices. You might quibble with England at No. 4, but that's nothing like the surprise at No. 12.

Tied with host Russia with 1.6 percent chance of winning the World Cup is Italy -- which isn't in the tournament.

The Azzurri failed to qualify for the World Cup, but they are given a four times greater chance of lifting the World Cup trophy than Sweden, the team that knocked them out of the finals.

If you were wondering, the USA didn't make the UBS computer simulation.