The Drawbacks of the Jesse Marsch Approach

Some assumptions are necessary here, before I get to my main point. Assumption No. 1: that, a few weeks back, a new president of U.S. Soccer was elected, Carlos Cordeiro by name. Assumption No. 2: that there really is a Carlos Cordeiro, that he is not a phantom, and from that comes Assumption No. 3: that he will at some point emerge from his hermitage long enough to tell us who he has chosen as the next coach of the U.S. men's national team.

Assumption No. 4 is simply that one of the candidates for that post will be Jesse Marsch, and it is Marsch I want to talk about. As a candidate, he has some obvious plus marks: he is young, American, articulate, and he has grown up through all the various developmental stages of the American game -- from youth up to two caps for the national team.

His pro career never hit the heights, though -- at age 24 -- he was a regular starter (under coach Bob Bradley) for the Chicago Fire -- an expansion team that had the audacity to win the MLS Cup in 1998. I never found him more than an average player, a bit too physical for my liking and with an irritating habit of quibbling with referees.

His MLS coaching career (36 games in charge of the Montreal Impact, 135 games at the New York Red Bulls), has produced a Supporters Shield trophy with the Bulls (2015) and -- the same year -- an MLS Coach of the Year award.

Statistically, that is not a particularly impressive record. But it doesn’t need to be. There is nothing in the history of soccer -- nothing that I’m aware of -- that says you have to have been a great player to be even a good coach. And there are plenty of examples of top coaches who were very minor players. Anyone recall Jose Mourinho as a player?

Selecting a coach certainly entails looking at his record, but there are always other, more specific, more local, considerations that weight heavily. I would say that Marsch’s solid, life-long connection to American soccer is a very compelling point in his favor.

Not that I would pick him. My vote would go to someone of similar American playing and coaching background: Jason Kreis. Simply because Kreis’s teams play the sort of soccer I admire, and Marsch’s teams do not.

There are obviously two rather different approaches here. Kreis strikes me as more open and adventurous in his view of the game. Marsch -- well, I can boil my criticism of Marsch’s approach down to just one game played recently, the Red Bulls’ 3-1 win in Atlanta. A deserved win for Marsch’s Red Bulls. Yet a win that raises some big questions about Marsch’s approach to the sport.

With barely 6 seconds on the clock we saw three Red Bulls racing up to gang-tackle an Atlanta player for the ball. Somehow, the ball was passed out of that scramble, up to another Atlanta player who was immediately knocked to the ground.

There was no excessive violence or dirty play involved -- simply an immediate, unapologetic example of physical play -- with the Bulls perfectly willing to accept that (in midfield) a foul might be called.

No foul was called. And the Marsch method -- highly energetic running, ultra-high (in this game) pressure continued throughout the first half. The main aim of such tactics is, of course, to unsettle -- even un-nerve -- the opponents.

Did it work? I’d say that it did -- in the first half. But that was all that was necessary. Jeff Larentowicz -- too clumsy, too slow -- nearly made things a lot easier for the Bulls by getting himself red-carded early in the second half but he (and Atlanta) were reprieved by a VAR decision reducing the card to a yellow.

No matter -- Bradley Wright-Phillips’s two goals soon followed and the Bulls had the breathing space to relax their frantic game somewhat. That was vital -- keeping up the running and the intensity that the Bulls maintained in the first half would have been asking a lot, probably too much. But Atlanta’s Greg Garza greatly helped the Bulls when he was red-carded in the 71st minute -- there was no VAR reprieve for this one.

I’m not here concerned with the refereeing or the VAR decisions which were, on the whole, correct. What does concern me is a coach who is willing to sacrifice any notion of his team playing decent soccer because he’s determined to intimidate the opposition, or simply run them into the ground. Preferably both, I suppose.

So: do I want to see the U.S. men's national team led by someone who prefers frantic physical hustle to intelligent, skillful soccer? Obviously not. But this is not merely a matter of my getting much more pleasure from watching the intelligent stuff.

That the Bulls’ slam-bang stuff is unattractive to watch is a side-issue. What matters is that it is a hopelessly limited way of playing, totally devoid of any subtlety, and therefore incapable of any development. A dead-end in fact. Any “style” that is based entirely on the muscular output of the players is automatically limited. There are, after all, limits on how fast players can run, how high they can jump, how hard they can tackle and how long they can keep playing with such strenuous effort.

The strain on the players involved is considerable. A consideration that is of vital consequence in tournament play, when games have to be played every few days, usually against experienced opposition. As in the World Cup.

The Marsch method calls for heroic devotion to duty to make it work. The Bulls certainly gave everything they had during the first half of the game against Atlanta. Even when it didn’t matter, they evidently found it difficult to relax.

Take a look at the picture -- this is in midfield, in the Red Bull half, near the touchline. And first-half time has already run out. Not exactly a situation presenting any danger to the Bulls. Yet Atlanta’s Darlington Nagbe (in red) has the ball and is attracting the close, very close, attention of three determined Red Bulls (one of whom is striker Wright-Phillips), while a fourth lurks nearby 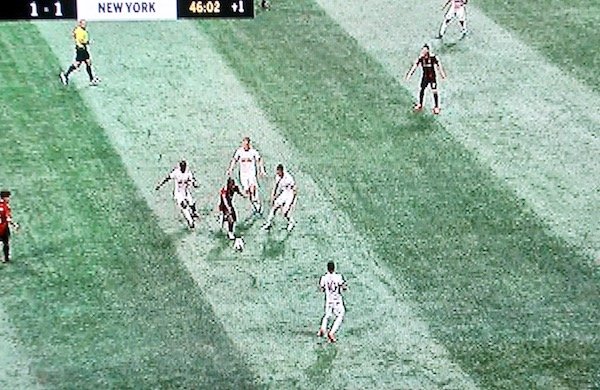 This is evidently what Marsch wants. Seconds later, as the halftime whistle blew, he was on the field, feverishly congratulating his players as though they had just won something. The score at that point was 1-1.

What is most depressing about the Marsch method is that his team has no place for a creative midfielder, a playmaker, a midfield maestro -- whatever he may be called, he’s not there. High-speed, high-pressure, high-tension soccer, in which your striker comes back to help out in gang-tackles, has no place for the creative player.

Which would surely mean that Marsch in charge of the national team would be very bad news for such players -- who are of course most likely to be found in the growing ranks of the American-born Hispanic players.

And, no, I cannot see any advantages to be found in that situation.