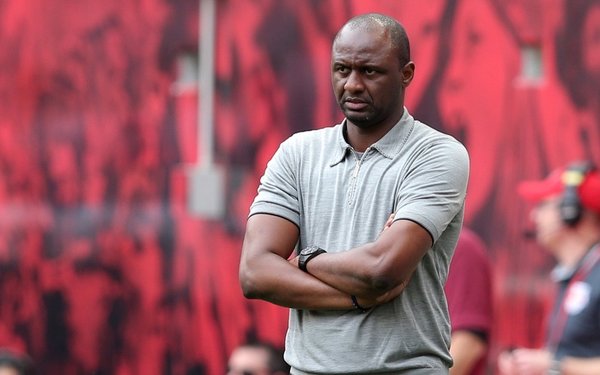 New York City FC coach Patrick Vieira denied a French report that he reached an agreement with Ligue 1 club Nice, saying he remains happy with NYCFC, which is third in the overall MLS standings with a 7-2-3 record, and focused on its next game Friday at Houston.

“It makes me smile, because of course there’s no contract being signed or anything like that,” Vieira told New York reporters after NYCFC's practice Tuesday afternoon in Orangeburg, New York. “This is the wrong information. I’m here, like always. I’m really happy.”

Sports daily L'Equipe reported Vieira had reached an agreement on a two-year contract with Nice to succeed Swiss coach Lucien Favre, who will take over at Borussia Dortmund next season.

According to L'Equipe, Nice president Jean-Pierre Rivere and director general Julien Fournier had been talking with Vieira for two weeks and were in New York last week to discuss the terms of the job -- the team's style of play, its youth policy and recruiting on the transfer market.

In the last year of a three-year contract, Vieira confirmed he had flown to France on Sunday but it was only to handle a personal matter. (Contrary to some U.S. reports, L'Equipe never said Vieira's trip to France with agent Bruno Satin had anything to do with the Nice job.)

Because of his success in three seasons with NYCFC and his career with the French national team and in England and Italy, the 41-year-old Vieira is a hot property in Ligue 1. He had talks last year with Rennes and St. Etienne, rejecting their offers because he was still under contract with City Football Group, the NYCFC owner, and he wasn't convinced about the situations at the particular clubs, nonetheless considered among the top 10 clubs in Ligue 1.

“That situation is the same for me,” Vieira also said on Tuesday. “Things that I can control are being here, having my head, my energy to this football club and then everything going out is out of my hands. I can’t control what’s going on in France, what’s going on England or what’s going on anywhere else."

If Vieira moved to Nice or elsewhere this summer, he'd need to get the approval of City Football Group. L'Equipe reported getting out his contract "won't be a problem" and no payment to NYCFC would be needed.

A bigger issue for Nice or any other Ligue 1 club is whether it finds itself in a tug of war with City Football Group over Vieira's future at the organization, which also owns Manchester City, the club at which he finished his playing career and started his coaching career in its elite program.